The Show ArtWars @ The Emerald Bar included Chuck Majewski, Aurellius Artist, Derek Donnelly and Jenipher Chandley. The Emerald, as one of the patrons pointed out to me during my visit to this show, "Is three things: By day, it's a classic neighborhood pub, by night home to hipsters and musicians, and in between there's art".


From iTrendy Aurellius, a robot holding a sign saying "All my favorite artists are on the 600 block". The 600 block has become a signifier for a certain level of success in the art scene (even though it has lots of its own issues). This painting is lightly mocking that, and implicitly saying there's a lot of art that's not on the 600 block, which is true. Ironically, some of the artists in "Art Wars" have shown on the 600 block.


Chainsaw Chuck's "Get Bent", like many of his other works shown, seems connected to nose art, 50's pin-ups and neo-lowbrow art. It is self-referential in that it mocks certain styles while simultaneously referring to them. There's no shortage of buxom, sensuous women in various stereotypical situations.

In "Surf Demon", the artist plays with the style from the era of Ed Roth, recontextualized to a look back that is only slightly nostalgic, and more questioning that genre. The figure retains the unbridled Dionysian nature of Roth's characters, but explores a bit further formally. 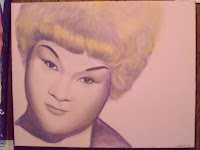 Derek Donnelly's "Etta" is one of his celebrity portraits. Derived from photos, what stands out is that Donnelly transcends the mechanical nature of a single photo-capture and breathes life, intensity and mystery into his characters, something rare that eludes a lot of  painters who do celebs from pictures. Etta James passed away recently.

I've reviewed Jennipher Chandley's work in these pages before. In "So tell me, where was my fault in loving you with my whole heart?", we see. At first glance, there are similarities between paintings of Salome and the head of John the Baptist [Link], or those depicting Judith and Holofernes [Link]. In the former, Salome asserts her desirability at the expense of John the Baptist's life. Judith is a warrior-princess who seductively makes her way into the enemy general's tent and kills him. This visually follows that tradition but is recontextualized into the present. The title tells us this is the (fantasy?) outcome of a love gone wrong, and a woman who can't grasp what went wrong, what she could have fixed, but the question is rhetorical: She has expressed/unleashed her considerable anger, beheaded her lover, and now holds his head as a war trophy. Now he can never leave. She clearly has not compromised her femininity in any way to do this. Take time to study the face on the female figure. That is not a triumphal look of having vanquished an enemy, or one of asserting feminine dominance. She looks away from the head, somewhat regretfully, but with the peace of having released the tectonic tensions of Fate.

Chandley's "Love my City" reminds me of another skyline view she did, a God's eye viewpoint of a city from above, except here the city is obviously in her head. What's in it? Tall pink buildings leaning towards each other. There's a 50's vintage sled (automobile). The Road and its call, unfolding from the middle of her head, like a weightless ribbon, goes out towards the unknown. Billiard balls hover like planets in their orbits. There's an Ace of Spades, and a palm tree. Her head is a sponge, soaking up memories, feelings, experiences. Love what I have come to love, the things that make me who I am. A lovely image of the combinatorics of identity.

Congratulations to all the artists and The Emerald for an unexpected and delightful surprise.