These may be the first two political street works apparently in anticipation of the RNC convention. Not too far from the St Pete Times Forum and on the small side, they make their point. 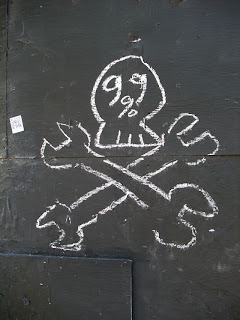 This is not Yale's version of Skull and Crossbones. Note the rostrum of the skull is composed of 99% for the eyes, denoting the great majority of the US population as popularized by OWS. The "crossbones" are not from the thigh, but they are wrenches. To anyone familiar with Earth First (Google), this is a symbol of mechanics. This work is apparently done in white chalk. 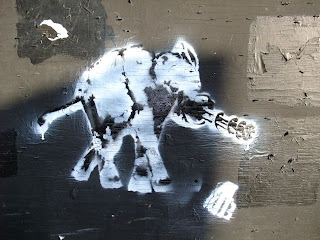 Here is a sketchy stencil of an elephant (the Republican symbol) with a Gatling-style rotating-barrel machine gun in place of its trunk. The Republicans as charging, marauding destroyers?