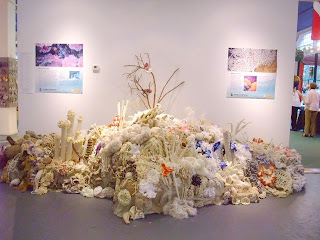 The Florida Craftsmen Gallery (FCG) has transformed its space into a coral reef habitat composed of crocheted animals. They sit on wood and chicken-wire forms with appropriately dyed cloth over them. 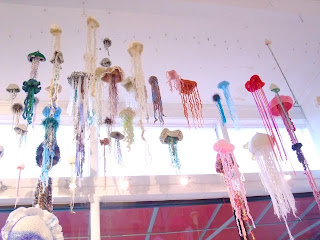 Over two-hundred and eighty (280) artists spent untold numbers of hours over a year crocheting the many, many figures that cover these forms. And it doesn't end there. Constellations of dreamy jellyfish float above like aspirations, rising all the way to the ceiling, their tentacles hanging many feet below. 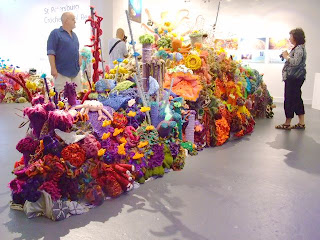 Meanwhile, visitors cruise, visibly stunned by the variety of textures, forms and color on the reef outcroppings, like schools of fish undulating among the corals.


This exhibit is part of an international project called the World Wide Hyperbolic Crochet Coral Reef, the brainchild of Margaret and Christine Wertheim about a dozen years ago. They wanted to increase awareness of marine conservation via exhibits like this one. The idea has gone viral, with many of these happening and being shown in different locations throughout the world. It also falls on the weekend of the World Oceans Celebration. 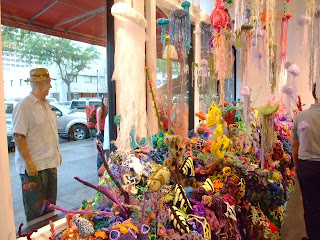 Once all the components arrived, twenty volunteers and FCG  staffers put together the installation. All of the contributed crocheted figures were incorporated into this huge collaborative installation, certainly one of, if not the biggest ever in St. Pete. Viewers looking in from the sidewalk looked like humans in tanks through the windows.


The amount of textures, forms and colors in the show are a banquet for the senses. Beyond one's ability to take it all in, gleefully overwhelming, alien and familiar, they invite a sweet surrender from the viewer, dislodging one from the every day, seducing them into swimming in the current. 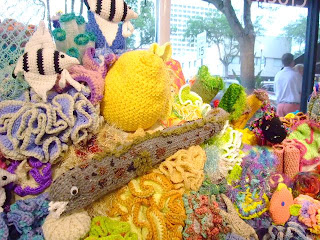 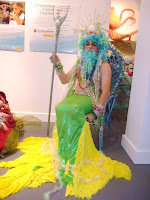 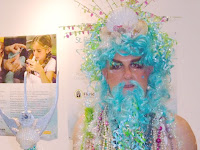 The more you look, the more there is, and the feeling is one of being embraced, admitted and absorbed into this aqueous carnival. Reigning over the reef was none other than Neptune, complete with his Trident and throne. 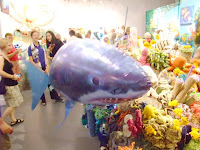 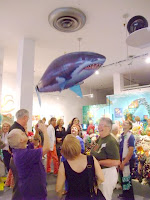 Suddenly, a floating shark appeared over the viewer's heads in the gallery. It swam lording over the scene, though I noticed it stayed clear of Neptune.

This is a complex installation, sensuous at one level, environmentally conscious, and hypnotic. Congratulations to each and every artist and installer involved, and to Florida Craftsmen Gallery  for a memorable show. 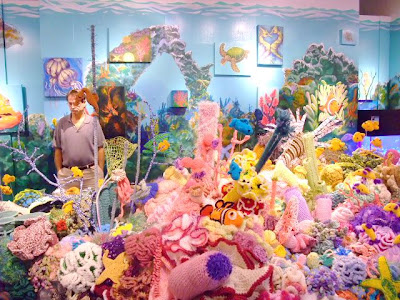