Empouria is a nice watering hole on third st in downtown St Petersburg. One of its large walls has become a satellite gallery for the Studio @ 620. This was its second exhibit, a one man show by Brandon Marshall.

Brandon is a young emerging artist whose work had been recently seen in Saint Paint's 420 group show where a rare figurative work in the form of a marijuana leaf was shown. All of the work in the Empouria show is abstract. Some of it uses upcycled materials, all of it is heavily textured and quite colorful.


In the work at left, Brandon uses a substrate of bubble wrap, which he then breaks up with square and rectangular bits. The tensions generated in the spontaneous breaks in symmetry give this mixed media work its strength. 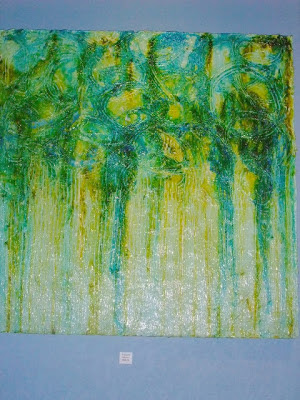 This mixed media piece is made largely of silicone caulking. Yes, caulking, which give it some three dimentionality, a rich texture and well-defined lines. Marshall told me that he is a self-made artist, with no art education background. The only influence he mentioned was Jackson Pollock. The caulking is an extremely durable material, literally able to withstand a hurricane. The artist's house was literally blown away during a storm, but he found the work in trees, under debris etc, and most of it survived (!).

Congratulations to Brandon Marshall, Empouria and 620 for a good show.