Full disclosure: I am not qualified to do this review, for I know very little about Visual Poetry (Vispo). Through it run strains from Fluxus, Dada, Mail Art, Concrete Poetry and probably other niche art forms. Make no mistake, these forms have been disproportionally influential with regard to their relative sizes in the art world. I know one of the early members of Fluxus, and a current one who is a mail artist. Fluxus' intermedia aspects are interlaced with Vispo and mail art as well. This interdisciplinary approach emerged in the mid-1960's and was spearheaded by Dick Higgins. The fusion begat hybrid forms with their own new, unusual creative energies. Paralleled by several web-based social networks (the original Facebook, I've been told) which also perform an analog to what the art does.. They are focused on the communicative and social aspects, not on marketable product. Most viewers of Vispo art are also total outsiders and it is in that spirit that I am doing this review.


Reed Altemus is a small publisher, Intermedia performance artist, and Vispo artist/poet who has shown internationally. His work has been published in several magazines across the world. In the Bay area we are fortunate to have one gallery owned by a Fluxus: eve N odd gallery, owned by Jennifer Kosharek. She hosted a one man show of Reed Altemus work  performances on opening night.

These works use typography as formal elements and their literal connections, phonetic and otherwise also persist  in an almot synesthetic manner. Most of the works were monochromatic, the one on the left in color. Note how the eye, trained to recognize words, fragments and letters, makes out words and connects them. The two large works Mr Altemus showed were similar in many ways. Both have two large black with white dot black bands, and in between a circle or two laced with words. There are darker bits of ink and jumbled letters almost blotted into black in places. In these pieces there are formal resonances between the dualities of forms, which are like reconciled paradoxes. Get closer and farther away from the works (or screen), stopping at each point, and you will see words emerging and subsiding dynamically.


Reed Altemus and Jennifer Kosharek moved from the gallery to the sidewalk just to the east of the Crislip Arcade gate and did some Fluxus performance pieces. Here are a few pictures... 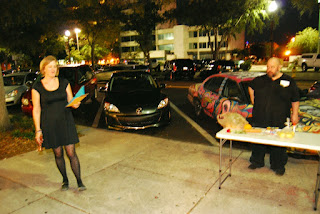 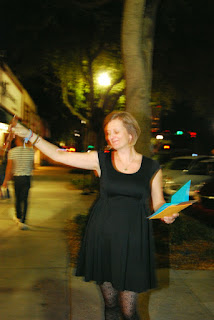 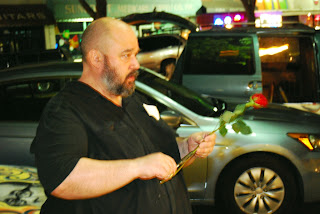 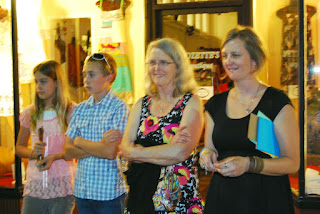 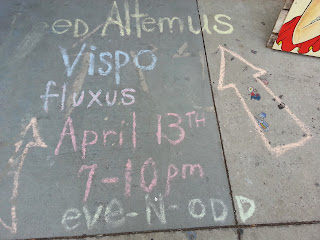 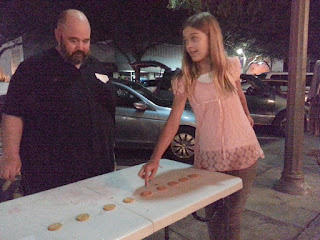 Here Mr. Altemus is performing a poignant piece by Davi "Det" Thompson, titled "Lessons". The audience member picks the most beautiful cracker (to them) and the rest get smashed. A lesson on ideals, hierarchies, preference, tolerance and much more. 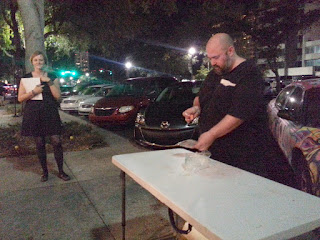 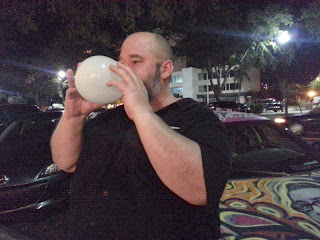 This performance was from Luc Fierens, "Balloon Piece". The slowly inflated balloon is released to jet away and fall to the ground. Very Zen and/or a metaphor on the transmigration of the soul or...

Congratulations to Reed Altemus for a very good show, and to Jennifer Kosharek for bringing the artist, Intermedia and Fluxus to the Bay area, and for access to the artist.