﻿
Kiaralinda and Todd Ramquist are a major cultural hub in Safety Harbor. Their Whimzey house (also known as the "Bowling Ball House, due to the yard being practically covered with them) is a cultural center on its own right, located @ 1206 3rd St. N.

﻿
﻿
﻿﻿
﻿﻿
﻿﻿
﻿For this spoken word event, Mitzi Gordon's micro-bookstore on wheels, the Bluebird Book Bus was on hand, as was the book box where people take and leave books to read and for others to read. People brought stacks of books to contribute to the exchange.
﻿﻿
﻿﻿ ﻿

The Ramquists brought in no less than Marc Smith, the originator of the poetry slam in from Chicago to spiritually guide and conduct the event. Marc is so brilliant, fluent and at ease with the spoken word, frequently using self-referential riffs incisively mocking himself, telling his history of the slams, inserting philosophical comments  and tips along with a healthy sense of humor and above all, a strong humanizing emphasis.

﻿
﻿Jennifer Kosharek read a very personal, moving and poignant piece from her memoirs.

It is nearly impossible to do an event like this justice in a blog post review. I counted twenty-one poets that read. What follows is an inadequate account of this enchanting afternoon.

Janet Lee Stinson opened and closed the event (aside from Marc Smith's intro and closing). 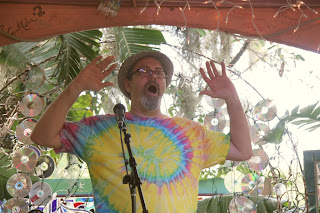 Ed Derkevics read poems about the quest for inner peace, having yak tea with a guru, and one about the Meditation Monkey. All while bongos played. 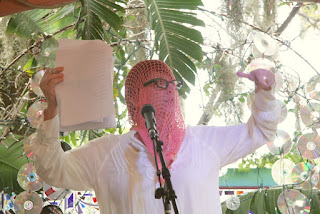 Debbie Klein read about aging, looking better in a paper bag and more while wearing a mesh bag as a bourka stand-in. 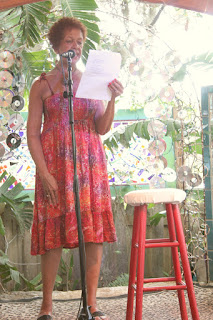 Amy Ryan read about diversity and the voice. 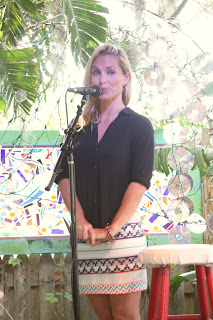 Imani Woomera wished she could speak Zulu with the accent, as a living language, and talked about how blood remembers you. 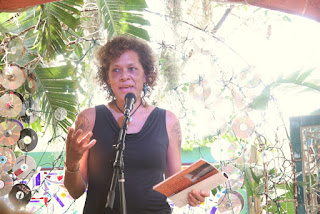 Mona Lisa spoke about books and how they impact our lives. 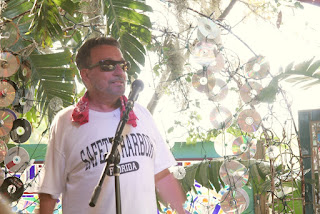 New York, lily glides, a Prisoner President, and breaking open choices were among the themes Bobby Saltzman read about. 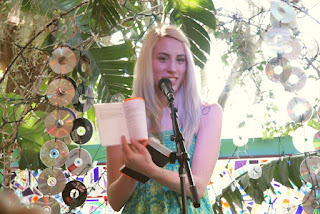 Shay Karpinsky makes zines, and this is what she talked about. She said most were tragic, One about Nature vs. her Mom's God. I bought one of them.

Renowned political activist and poet "Jimmy" delivered a fast-paced poem about you being the one you've been waiting for.

Brian read his poem from his iPhone, about drowning in his own ink.

Greg Bird's poems about the nature of war were poingnant, particularly in the context of the landscape. 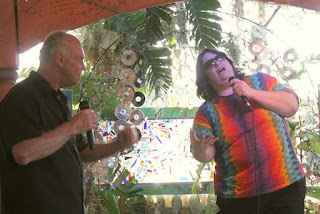 Vera Page (r.) gave a spirited series of readings in a 1950's style, using her entire body to make gestures. This way of doing poetry is called "Visual poetry", as Marc Smith explained at the beginning of the readings. 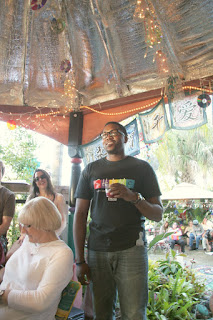 Brian Cross's poem, "The Good Samaritan Woman", a paean to women, brought down the house and had one lady ask where the sign-up sheet to have sex with him was! 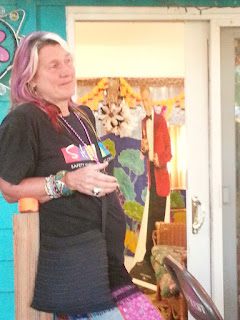 Janet Lee Stinson closed the reading with a poem by Kiaralinda's father. On the left is a photo of her listening to her Dad's words.

Marc finished with a poem that took him into the audience, shaking and holding hands, tapping shoulders while extemporaneously reciting a poem using mountain climbing metaphors for helping each other through levels of being, like the angels on Jacob's Ladder.

All of this reminded me of the few religious tent revivals and healing crusades I have attended. The event literally took place under a tent of sorts, there were poets delivering testimonials and bearing witness to life's twists and turns and their effects on the human spirit. In this case, the vector is oriented to the humanization of those present. Many poets act as trance witnesses, all to the same point: To raise the human spirit, in this instance in a secular manner.

Congratulations to all of the poets, Mitzi Gordon and her Blue Bird Book Bus, the Southern Letterpress truck, the many volunteers in Safety Harbor,Marc Smith for doing an extraordinary job teaching the audience about poetry, and his own enlightened work, and of course, Kiaralinda and Todd for putting on a spoken word ladnmark event.

Email ThisBlogThis!Share to TwitterShare to FacebookShare to Pinterest
Labels: `````