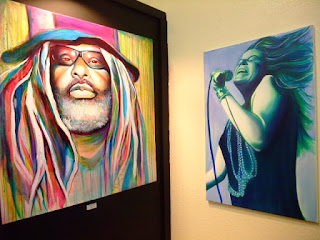 Saint Paint Gallery recently opened a show titled Brush Songs, devoted to art based on music. On the left are two works by Saint Paint owner Derek Donnelly. On the left a portrait of George Clinton, on the right, Janis Joplin.


On the left is a painting titled and based on a song that has become a favorite of sports fans, Don't Stop Believing.


Jenipher Chandley's portrait titled "I want you" could be from a variety of people who've written and sang songs with that title. Either way, it is a beautiful portrait.


Aureilieus Artist showed "Two-headed Boy", after the song by Neutral Milk Hotel. The words on the hair, colors and stitching all make for a strong image.

Congratulations to all the artists, Saint Paint and Derek Donnelly for a good show.