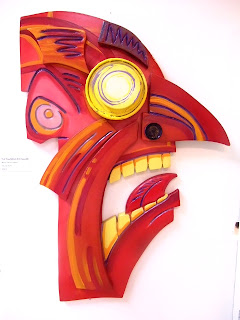 The Wandering Eye Gallery in Ybor City opened on June 7th at 1527 7th Ave. This Gallery is an artists' cooperative in the sense that members pool their money to share the burden of overhead costs. This is not an uncommon practice, particularly during trying economic times. Some galleries do this in other forms. It has its pitfalls, but brings new spaces into being and helps others stay open. I believe most of the artists in Wandering Eye are from the YAA, now being run by Princess Simpson Rashid.

On the left, "Boiling Point", by Warren Carrico Gibson, one of several works by him in this show. These wooden, painted mixed media works have a totemic/ tribal quality to them, and strong emotional content. 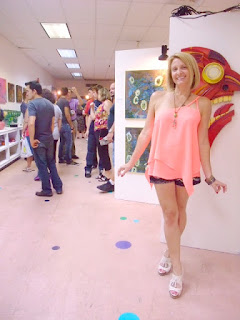 Sharon Carlstedt Britton gave me generous amounts of time and attention as she showed me around the gallery. 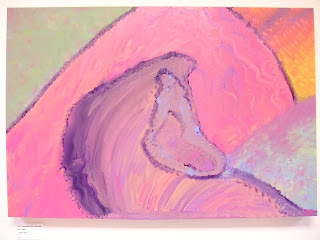 Ms. Carlstedt Britton had several abstracts in the show. This one, titled "transfer motion", radiated energy and organic sensuousness, in apparent waves. 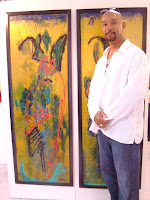 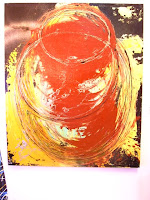 Clyde McLaughlin had several works in the show. on the left he is shown with his painted partition,
On the right is his work titled "Delirium", an abstract painting involving a passionate red in three levels. With energy spilling out cooling into yellows.


Peter Malamoutsis had several beautiful small glass works in the show, including "Jupiter", above. 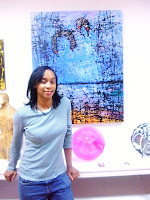 The aptly named Princess Simpson Rashid posing in front of one of her abstract paintings. She is the head of the YAA. This gallery brings work by YAA artists to the ground level on Seventh Avenue in Ybor City, giving them much needed higher visibility.

Congratulations to all the artists, Wandering Eye Gallery, and the YAA for a good show.