The U562 gallery and studio space is an up and coming member of the Warehouse Arts District. Situated along the Artchipielago of spaces from Duncan McClellan's to Zen Glass it is finding its identity and evolving rapidly under the leadership of Kendra and Christian Zvonik.

On May 11th, the show featured the work of Evan Thomas Niemann, Kendra Zvonik, and Morgan Swim, who has one of the studios in the building.


Evan had the most work in the show. His dedication to making and living from his art has, at times, led to him living in his car. It is not surprising to see the automotive theme in his work. On the left is a mixed media work (mainly photography) titled "Whitewalls". It depicts a custom car, done in 50's style. Evan has chosen a low POV emphasizing aspects most viewers would not see.


There were two installations in the show, the one shown below consisting of a variety of things, including but not limited to bicycle parts, tailgate tubing, flatwork, an HO scale model car track (that ran through the work!) framed in the front by a car bumper. 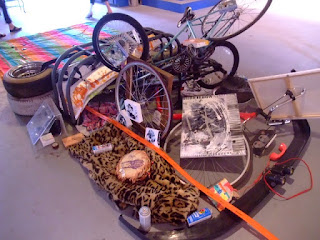 Morgan Swim had some interesting work in the show, but she declined being reviewed.

Congratulations to Evan Thomans Niemann and Kendra Zvonik for a good show.