The idea of a show of art created on spent spray paint cans (the kind used for graffiti) has openness, ecumenical and egalitarian aspects that many artists and viewers can identify with. It is anti-art, in a Dada sense, self-referential and populist,  bringing elites and unknowns together under one common meme.

"Money Repellant", by Aureilieus, shows a picture of the artist and other graphic elements alluding to the relationship, for many artists, between art and money.

Ales Bask Hostomsky brought this can, flattened to yield a round head and bottom. It seems to be an hommage a' Gretchen, a recurring motif/figure in Jennifer Kosharek's own art.

Spray cans are used to do murals and graffiti and discarded when empty. To use them as the canvas on which to make art is self-referential. The consumable and disposable, that which was used to make art, is transformed into art, bought, taken home and cherished. This type of art reportedly began in Los Angeles decades ago, where it is called Can Art.

These two works are by Jennifer Kosharek. Note the Gretchen figure on the left, carrying in her belly three small ships (also recurring symbols in her art). One of the ships is also visible on the right. Total Disclosure time: I immediately bought the one on the left, and felt a little guilty about the (ultra-low) price.

Two years ago, I bought a can by local graffiti artist Chris Center that was covered with abstract designs done on plastic applied to the can. However, the show (At Collective) was about Center's paintings, etc. The cans were an afterthought. That can, which is purple, is on loan for this show. 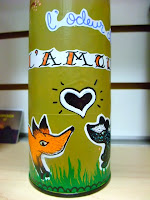 Moy and Melissa Loera, two of St. Pete's standout artists, entered this show. On the left is Moy's can, with one of his recurring characters in a very graphic style. Melissa painted the can on the right, "The Scent of Love", with a Fox and a Skunk nose-to-nose and a black and white heart.

The CANNED show at Jennifer Kosharek's eve N odd Gallery in the Crislip Arcade on the 600 Block is all Can Art. As far as I can tell it is the first of its kind on either side of the Bay. Curator Kosharek issued an open call. Everyone who submitted a can made it into the show. Normally, this kind of egalitarian approach would result in what one commonly sees in rent-a-wall, vanity galleries, or those showing members only.


The can on the left was one of a handful that had spatial extensions from the can's edge. In this case, the top figure has ears or horns, the middle one a long and pointy nose, the last, arms.

Beth Warmath had four cans in the show of "Cephalopod Flowers". Look closely, and the tentacles and suckers are clearly visible.


In the above photo, at left, Mike Rozak, aka DJ-13, who provided track after track of great music during the show, the Breits, and Ungala on the right.


To be sure, there is a wide range of skill, content and quality in the works, but the show is strong. The novelty of seeing art on spray cans, on a round ground, takes a little getting used to. The work can only be fully appreciated by either turning it around in place, or by picking it up (which is allowed) and doing the same thing. Each becomes a very brief analog of the late 1800's cycloramas that were popular at the time. One can't see the whole thing at one time.

Many of the works are from significant local artists as well as a few national and international ones. But by focusing on them, I would be subverting the egalitarian philosophy of this show. For Jennifer, there are no nobodies in the art world. The Darwinism, elitism and hierarchical thinking behind most gallery/museum shows is absent here. Spray cans are nearly identical in height and circumference. The work of unknowns and knowns gets equal billing and space. Everybody is SOMEBODY and has a place in the art world.

One of the works was a Fluxus Performance capsule of sorts from Sinclair Scripa. Performed by Jennifer, the piece had floral forms with rosaceous smells as it was unpacked. At the bottom was a beautiful can.

Sinclair Scripa sent a Virgen de Guadalupe can with nails sticking out of it.


Congratulations to all the artists and Jennifer Kosharek of eve N odd gallery for a very good show.