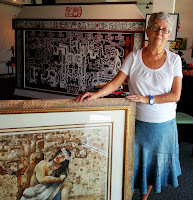 Listen and view the interview of Aurora on Mi Gente Tampa Bay.  The interview is in Spanish.
Read about Aurora in Centro Tampa  August 15, 2013.

Aurora was born and raised in Mexico City where she studied architecture and education. She works in various media such as oil, acrylic, Ink, pastel, clay and polymer clay and  has been inspired by Aztec and Maya mythology, philosophy, ancient astronomy, as well as memories created by the many ancient Native peoples of the Americas.

Aurora taught in  grade schools in Mexico City for many years. Her students’ inquisitiveness and wish to learn increased her own curiosity for what mankind is and does. Her experiences led her to learn several languages and to work in the tourist industry so that she could travel and experience first hand diverse

cultures and their people. Encouraged and supported by her husband,  she has had the opportunity to work full time on art.

Aurora was invited to address lectures for the Hispanic Cultural Society of The Library of Congress in Washington D.C. in 1994, through 1999 on Mesoamerican Mythology. Due to the didactic message of her paintings she has been invited to numerous schools to lecture on Aztec and Maya mythology demonstrated in her paintings. She has been a docent for the Salvador Dali’s Museum since 2000. Her work can be found in numerous private art collections in USA, France, England, Italy, Japan, Spain and Mexico.  Aurora paints many of her works on amate paper.

What Wikipedia says about Amate paper.

Amate (Spanish: amate [a'mate] from Nahuatl: āmatl ['aːmat͡ɬ]) is a form of paper that has been manufactured in Mexico since the pre-Hispanic times. Amate paper was extensively produced and used for both communication, records and ritual during the Aztec Empire; however, after the Spanish conquest, its production was mostly banned and replaced by European paper.
Posted by Luis at 9:47 AM