Off and Running: First Night's Pods Show, Part I


Most of it took place on the last day of 2011, and it also ushered in 2012. First Night, St. Petersburg's outstanding New Year's celebration and its visual arts Pod Show. This successful and inexpensive way to welcome the New Year is a true family event, where people of all ages, including children, experience the end and beginning of a Year with performances,  participant events, exhibits, concerts and more.


Technically the first visual arts show of 2012 in the area, this one hit the ground running. There were, if memory serves, six Pods installations in this show. In the photograph at left, are the Blue Lucy and Zen Glass installations.


"First Night in the Black Forest" was Coralette Damme's installation. Her work is no stranger to this blog, having been reviewed here [Link], [Link], [Link], [Link] many times. This installation was of a miniature, geomythological rendition of the Schwarzwald (Black Forest). A little one-sheet handout guide to the work was  available, explaining enough to help the truly lost, but not in any way spoiling the mysteries and surprises in this work of art.

One of the difficult things about the Pods spaces is the lighting. This installation was beautifully lit, with overhead lights, and others, well-placed to suggest wintry light in the black fir forest. This was designed as a walk-through. Note the "U" shaped walkspace, er....trail.


The Black Forest is at the heart of German mythology. This artist is of German heritage, and is lovingly steeped in the culture. As she wrote in the handout: "My family, my history.". I've written that Coralette has an unusually direct connection to her subconscious energies, often manifested in the form of animal totems. This is evident in this work in many ways. Entering the cube, the first thing I noticed was that the sides are wallpapered and the paper has cuckoo clocks on it. The artist says they have to do with "Time, tradition, craftsmanship, memory, hurry up and get something done before it is too late". The area around the Black Forest is famous for making excellent clocks of this type. To me, the wallpaper is also a memento vivis, a reminder to live life fully. 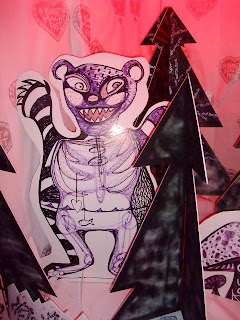 There's lots of bears in this forest, like the one depicted on the left, emerging from between black firs, with a toothy grin weightlessly balanced between being cute and fierce, also transcending literal 'bearness' itself.
Note the graphic markings on this one. It resembles the figures we see in Inuit art/totem poles from Canada or Alaska. Coralette uses a method that was used in cave art: X-Ray views of her figures. You can see into the bear, view it stylized, moon-like ribs, spinal vertebrae, abstracted as disks (looking like something out of a diagram of chakras), from one dangles a heart, from another a fish/lure which swims in an inner lake inside the bear. Look at its legs, you can see some bones in there. This is the kind of space that varies every inch you move through it.
Coralette says bout Bears: "The Bear is the symbol of Berlin. I love Berlin. I love Bears. They're cute, but they might just as soon eat you as look at you."

On the left is Coralette as the She-Bear of the Schwarzwald.


Ps. One of the many fascinating things about this work is that it was financed via Kickstarter. There was a board with the contributors' names by the entrance to the Pod.