It has been a year since the Venture Compound came into being. During that time it has evolved rapidly through various incarnations, but its commitment to music and art has only grown. Their photo show, Compound Eye, showcased the work of photographers who are friends and habitues of the Venture Compund, like Jonathan Sugarman, Jesse Vance, Jim Ginaker, Ben Barrett, Wayne S. Williams, Savannah Austin, Daniel J. Reyes, and Grethen Goetzman. 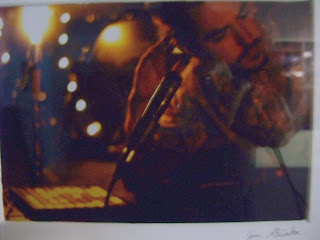 The VC is a challenging location for any photographer, with mixed light sources, wildly varying exposures, etc. On the left, we see photographer Jim Ginaker making the best of it in this close-up of Jesse Thelonious Vance. Note the arc of lights on the left, how they have Jesse's face at their center,, highlighting his intensity. 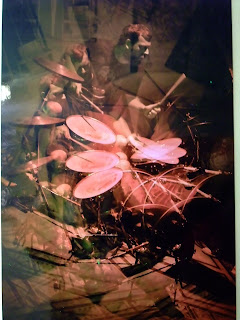 Wayne S. Williams is a poet of the spoken word -- and the camera. In this picture he used a multiple exposure technique the old-fashioned way: In camera, not through PS. This is pinball-wizardry of the first magnitude, implying movement, with dynamic formal elements as well. The multiple figure and ovoids of the drum heads and cymbals are beautifully done. 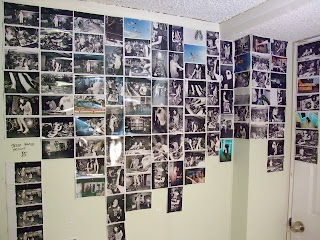 Jesse Vance presented this tiled group of 4x6 prints of several concerts. This group has real historical as well as artistic value. I want to see them labeled and tipped into a book. 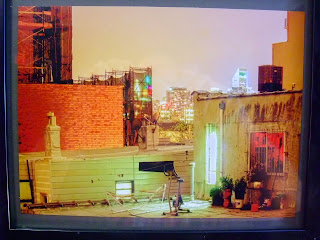 Jonathan Sugarman, who does VC Photo classes is very passionate about his work. He had several images of towns and cities, mostly in the Western US, mostly long views with subtle colors, planar, layered looks, like this one, and on the graphic side.


Congratulations to all the photographers, Jesse and Brad for a good show.