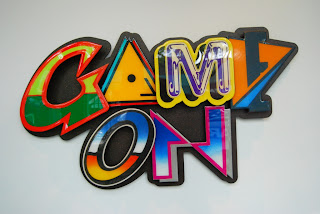 Blue Lucy's Game On! Show is playful. Chad and Philip moved in three old-school pinball machines and a digital game into the gallery. The works fell into two main categories, those nostalgic about games played during happier, earlier times, and those that incorporated concepts and more personal views.

This acrylic and pen on wood by Lauren Rasch is more about social games. The title gives it a touch of irony.

Sue Woodall's "Where Does All the Money Go?" is about real life. A serpentine route for the pieces to move on enters and exits the frame (birth & death?) . A wheel of fortune in the lower left is crowned with play money. On the board are a house, SUV and wedding ring.


Jennifer Kosharek's "Stop Playing Games" consists of the title/plea made with Scrabble tiles in the center, with five major 'tentacles' extending out of it, with five lesser ones in between, four of them reaching the edge of the frame. There are small figures glued to it, and text.


A mythical totemic figure at a Ouija board holds the planchette over the letter "Y", while cringing unhappily. Below, a string of numbers, ending with a 0X (hug and a kiss?).

Dylan Marvin's "Homo Wakawakawaka" was a hit with the opening night crowd. More about the game player than any particular game (in spite of the Pac Man emphasis), the combination of concept and pseudo-realistic craft was effective. In that little box at the bottom is text about the evolution of Homo Wakawakawaka, accompanied by the familiar version of the morphological rise of homo sapiens with the Waka-man addition, and a world map with highlighted areas of distribution.


Sarah Thee Campagna's "The Robot did It" is based on the game Clue. The robot is holding the weapons, the back is a fractured series of metal planes with bits from the game transferred onto it. This may seem like nitpicking, and perhaps it is, but the light tones of the chains holding the platform the robot sits on and the two hinges holding the platform onto the back are a little too light compared to the background and command a little attention away from the rest of this otherwise strong piece.

Congratulations to all the artists and to Blue Lucy for a good show. This Saturday, April 14th, is the last day for seeing this show. If you haven't, I strongly recommend it.