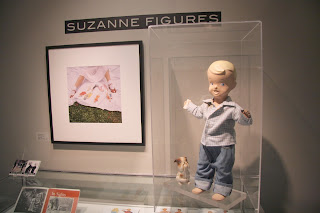 Gallery 221, located in the 2nd floor of the HCC Dale Mabry Campus is one of those rare spaces that consistently puts on shows all out of proportion to what one might expect from a gallery in a Jr. College Campus. The current show is a one woman photography show by one of Tampa's photographer Laureates, Suzanne Camp Crosby titled "Suzanne Figures".


Suzanne Camp Crosby is one of our cultural treasures, a photographer with four decades of experience, scores of solo shows, NYC representation, and work in many major museum, corporate and private collections. Although this exhibit has a good sampling from most of those years, she cautioned me that there are some gaps and that this is not a retrospective.


The work goes from the mid-1970's to this day. Looked at, this is more than a one-woman show, or a quasi-retrospective.It is also a segment of the history of directorial photography and how it dealt with issues over time. Suzanne does not walk around with her camera photographing found objects, people or street scenes, is not a portraitist per se, nor a commercial photographer.

She builds tableaus or assemblage, then photographs them. Here is a definition of this type of photography from A.D. Coleman, from the introduction to Arthur Tress's book, Theater of The Mind (1976):

"It is in the directorial mode of photography more than any other that the fictional nature of the photographic image is not only recognized and explored but openly declared as an active premise, a hermeneutical stance. This mode might most simply be defined as the deliberate staging of events for the express purpose of making photographs thereof—as distinguished from addressing oneself through the camera to an ongoing, uncontrolled external "reality."

This kind of photography dates back to the very beginnings of the medium, with the first Daguerreotype and Fox Talbot's Pencil of Nature. In this case there are figures involved, though not necessarily human figures. Cows, for example. Nor are all the figures dolls or there. Sometimes they are conspicuous by their absence.

The year is 1975. The artist is in her mid-20's. Gerald Ford is President. The Watergate burglars are sentenced. The Viet Nam War is raging. OPEC raises prices again. Suzanne is doing a self-portrait in front of a mirror wearing a hooded cape, so she is visible from behind and frontally, coming and going. In between, the eternal present, suspended. An arch is visible to the viewer's right of both figures, bringing to mind a scythe. The photographer/subject's face looks worried. Note that all these tableaus have the signifiers of a narrative..

Two Cowboy-girl 2D figures in front of a Mustang. We get it, or so we think, but this image goes well beyond that. These idealized figures stand before classic American signifiers --- the car, the house, beautiful people....

In this "Homewrecker", 2010, figures are reduced to black cut-outs. Why the black cut-outs? What is the effect of removing the figures from the scene?  In this case the cut-outs could be of family figures....a couple and the other woman. Following the principle that Nature (and mind) abhors a vacuum, this leaves room for the viewer to project figures from his own memory (or himself) into the voids .

This is a comprehensive show about one of our best established photographers. It runs through May 2nd.