When we think of stained glass, what comes to mind? For most of us church windows, perhaps medieval ones. These translucent glass panes told a story that almost all of their viewers grew to know intimately, the biblical narrative of the life of Jesus, the Apostles and saints. Each a station of icons backlit and glowing, some times casting their light and story directly upon the worshippers.

Fast forward seven hundred years to New York artist Joseph Cavalieri who is using the same methods to make small wall-hung stained glass that tell familiar stories of present-day icons. Cavalieri, who is also a graphic artist, refers to his work as "glass posters". They are poster-sized, but the difference between reflected light off paper and the translucence of glass are worlds apart.

In the work at left, part of "The Jackie O. Series", we see a familiar American icon, Jacqueline Onassis in the foreground, with many smaller images of her in different Chanel suits and hair styles in near contact-sheet form. In the bigger image, she looks strong, resolute and monumental. Definitely fashionable. A modern uber frau, well ahead of her time, forging her way into history and the consciousness of her time. What role do the smaller images play? There is an interplay between all of the images in this work, and particularly between the large and small. The smaller ones are like a typology of Jackie O., the larger stands almost eternal. That tension between the multiples and the singular is a major aspect of this piece. 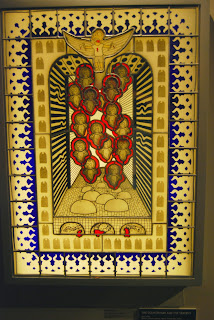 Some of the icons of our age are as mythical as those of the Middle Ages, and much more secular. One example is the piece on left, where the figures are characters from the long-running  The Simpsons TV show. Titled "The Countryman and the Serpent". That title is from one of  Aesop's Fables about a man that rescues a nearly-frozen snake only to be bitten by it when it recovers. The man chops it up into three pieces, unwittingly mutiplying it. The snake segments try to reunite in vain. Here we see them at the bottom of the image (click to enlarge). Each isolated in its own compartment. Just above, we see those domed compartments,but about eight of them. Above the figure of Maggie Simpson rises, fourteen of them, into two arches, the outlines of which repeat around the edge of the central rectangle of the image. Above it all, Bart, wearing wings, rises, holding a bloody hatchet in each hand. He is both Countryman and Serpent.