This is the kind of story that should have had a DNR (do not resuscitate) order on it, but it is being kept alive via artificial means. It has turned out to be the single most corrosive and divisive event in the Saint Petersburg art scene in years. Ten days later, things have quieted on the surface, there are strong emotions, and hard words continue to be hurled on Facebook and in cafes, bars and back alleys, which is why I am writing about it now. 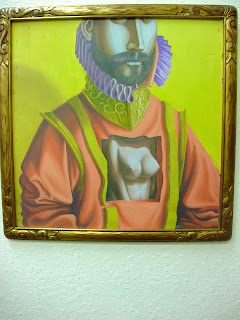 On April 14th, Sebastian Coolidge, renowned Saint Pete muralist, painted a mural on the wall behind Blue Lucy gallery, on the West side. The mural was a similar, supersized but far from identical version of a painting (on left) that had already stirred controversy at the Holocaust Museum, from which it was banned. To the Holocaust Museum's credit, "Depth's Desire" was replaced with another Coolidge painting that featured the silhouette of a breast, but on a female body.

It seems that the offending thing there was the (literal) description of an objectified female torso in the chest of a man.

The figure in the mural was that of an older, heavier-set man, using a nearly identical trope to this one. 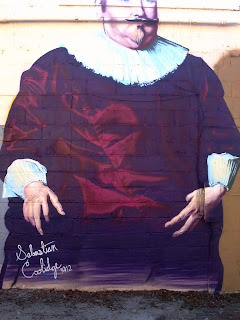 Since bare breasts are apparently forbidden by a city ordinance, the artist narrowly, if at all, skirted the issue by leaving the cut-out in white, and projecting a bare-breasted woman onto it.

On that night, Sebastian Coolidge and Chad Mize of Blue Lucy openly talked about the idea of painting in the breasts, and both commented on how they would be covered up. This is exactly what Sebastian did, and the outcome was just as he and Chad predicted: Gary Burnside, the 600 block property manager painted over the breasts and Sebastian's signature (which, although well within his rights, would later curry much animosity from the arts community).

Many artists expressed well-meaning sympathy in solidarity for Sebastian and displeasure with the cover-up. Some aimed at the City, some at Burnside, and some at people who weren't even there. That morning, Burnside called police about the possibility of a hate crime being committed. The reason for this was that the wall on which Coolidge was granted permission by Burnside to paint was on the exterior of a store owned by a Muslim merchant. The police expressed doubt as to whether there was a hate crime charge in the case. Predictably, this aroused further indignation from the local arts community. There is no denying that Sebastian's popularity played a part in all this.

Sebastian then went back and painted on the figure something to the tune that "Sometimes when you lose, you actually win", claiming the high moral ground. The venom flowed freely from then to this day. Chad told someone (to whom he later apologized) to their face they had been blacklisted from Blue Lucy. Wait...blacklists in the 2013 arts scene in St Pete? Really?

Also on Facebook, Gary Burnside, for granting generous permission to Chad and Sebastian to do the mural, being betrayed with the boobs, and forced to cover it up, was rewarded in Facebook by people other than Sebastian and Chad with physical threats, including lynching and being shot.

In private conversations (which remain private and off the record) animosity flooded the community.

I offered to meet with one of the principals in all this, but so far he has not replied after saying he would. The other told me publicly to "shut up".  This tapped the rock, causing a gush of gossip and zero meaningful dialogue. One wonders how other owners of walls will react the next time they are asked to donate space. A repeat of this debacle remains a very real possibility.

Ironically -- and sadly -- the antics surrounding the mural have totally eclipsed the Blue Lucy show it was meant to highlight, which is unfair to the artists in it.

Then there is the City. Breasts are forbidden to be painted on walls in desolated alleys, yet are perfectly OK in three dimensions on life-sized statues in a park bordering on Beach Drive, where tourists and children, for G-d's sakes, play every day.

How does a community recover from a thing like this? Not by burying it, as many would prefer, having gotten their insults in followed by facile apologies, mistrusting each other, continuing to hurl insults on FB (still going on as this is being written), or letting time turn it into a crusty brown smear, but by remembering who we are, how important every one of us is to the community, and chilling, forgiving, and reaching out to each other. Meaningful dialogue may be too much to hope for...