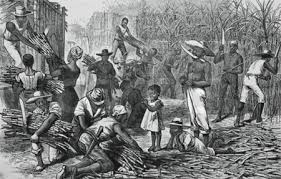 Like Kirk Ke Wang, I loved Cuban sugar as a child. Whether refined into fine white grains or dripping out of a fresh-cut green stalk of sugar cane, it hit the taste buds hard, overwhelming the senses. Wang tasted his in China. I, in Cuba. Before Fidel and Communism, Cuban sugar was also craved in the United States. The United Fruit Company (Now Chiquita), the biggest employer in Latin America, was a ruthless company that routinely bribed officials, exploited many workers literally to death, the "lucky" ones had no days off, vacations, education, medical care, they lived like medieval peasants. I saw them first-hand as a child, the dirt-floored huts in which they lived, the poverty...and wondered how anyone could be so cruel to anyone else. I was too naive to know any better.


UFCO paid next to no taxes in the countries it did business in, repeatedly subverted agrarian reform, toppled indigenous governments it could not control, and more. They ran the sugar business in Cuba, representing the face of American Imperialism on the island, where it was known as "El Pulpo" (the octopus) for its many tentacles into the affairs of Latin America. The American writer O. Henry coined the term "Banana republic" for any country dominated by United Fruit. It was partially owned by George Herbert Walker Bush when Arbenz was deposed in Guatemala (he favored agrarian reform, a fatal error) and when Panama's Torrijos conveniently died in a suspicious plane crash. I could go on and on...but you get the idea.


The sweet smell of sugar profits drew in this corporatized band of 2nd wave conquistador/barbarians who savaged Cuba and other Latin American countries for decades. Sugar was explosive long before it was packaged in bomb form.

When the trumpet sounded
everything was prepared on earth,
and Jehovah gave the world
to Coca-Cola Inc., Anaconda,
Ford Motors, and other corporations.
The United Fruit Company
reserved for itself the most juicy
piece, the central coast of my world,
the delicate waist of America.
For the rest [Link]

The American and other empires not only helped themselves to the natural resources of any nation that had them, but it also practices to this day the inverse form of this tactic in the form of embargos. The moment a nation is deemed hostile (or non-subservient to corporate interests), the USA deals with them like a person suffering from a terminal case of Narcissistic Personality Disorder: We ice wall them out, cease to talk with them, and impose an embargo of whatever they need, effectively weaponizing commodities by interfering with the capitalistic flow of business in the form of goods and services. This pathologically complex, multifaceted strategy is the central theme of Wang's show.

In Cuba, the embargo designed to punish the Commies brought nothing but misery to the poor Cubans trying to get by under circumstances that make the 2008 US Depression look like L'Age D'Or (the Golden Age).  Due to a lack of medicines, thousands of children and adults died needlessly from illnesses/conditions that could have easily been remedied.

In the installation "Sugar Bomb", dozens of bomb and missile shaped sculptures hang from the ceiling of the gallery, as if raining on the viewer. Some are made of Cuban Sugar, made in Cuba when Wang visited the island. We spoke about all this at the opening of the show, the artist showing me how at least one bomb was made of Cuban Sugar, the problems he had encountered making it, and showed me Cuban ants trapped like flies in amber, in the sweet bomb casing. "Red ants?", I quipped.

Other bombs are filled with Skittles [Link] candy, etc. They range from about a meter long to small 4cm. ones made from small jars, beer cans, etc. On two walls, videos Wang made on his trip to Cuba play, projected through the hanging fruits of bombs, their shadows cast upon the video imagery. I remember when we thought American bombs would really fall upon us. A propagandist soundtrack
played over all this. There were chairs "embedded" into the walls, with headsets dangling from them as if blown apart from a bomb going off.

It is an extraordinary installation, with a bit of sensory overload and over the top bomb-astic (sorry) colors, Wang's signature poignant playfulness, and a kind of pop attitude.


Both HCC Galleries are fast rising in the ranks of Tampa's premier art spaces with diverse, incisive exhibitions. Their Directors, Carolyn Kossar (Ybor) and Katherine Gibson (Dale Mabry) have become driving forces in the Tampa Art scene, all out of proportion to the size and budget of their galleries. Student Government funds the cost of these exhibits at both campuses in Tampa. I cannot praise them enough for the good that they are doing for this community.

[If one of you is reading this, I would like to interview someone from SGA about this.]


Personal Note: In Cuba, I attended a private school run by French priests and brothers. It wasn't very far from the port of Havana and its infamous El Morro fort/prison. It was a hot, sunny day, and we were in a huge grassy field behind the classroom buildings during Phys. Ed., playing soccer. The priests and brothers were playing the roles of referees, when we saw a huge mushroom cloud rising above the treeline. We all thought we knew what that meant (an American nuclear bomb) and ran to the priests like scared animals, clustering around them on our knees, crying and praying like we had never prayed before. The priest I ran to crossed himself and said, looking at the cloud and to no one in particular "It has begun". A huge boom followed and a shockwave blew through, carrying leaves and clouds of dust as the priests gave us our last rites. We waited to die from the nuclear blast.... but everything calmed down.

A French ship carrying munitions had been blown up by the anti-Castro resistance in the harbor.

Every day since then has been a bonus.