Ricardo de la Vega and Felipe Packard are Gulfport artists who collaborate in making sculptures like the ones exhibited in this show. Their chosen process, paper casting with built-in armatures, similar to paper mache, raises questions about the preciousness of materials. These questions have been explored at length in art for some time, and it is good to remember that the method has a long tradition in places like Mexico, where de la Vega was born. Packard was born in Illinois and went to Mexico at 14, acquiring his education there before returning to the US twenty-eight years later.

On the right is a picture of "La Abuela" (The Grandmother). The statue is life-sized, five feet tall. She is a familiar body type, a little Botero-ish, and a strong presence. Her business is life, the giving, propagating, mysteries and maintenance thereof. She carries a clay tub with what looks like water in it. Note how it makes a maelstrom in its center. La Abuela brings it.


European Surrealism dovetailed with the magical realism of Latin America. Its influences affected many artists in Mexico from the late 1930's on and persist to this day. Here is an echo of it in "Paseando por el Parque" (Riding around the Park). A fashionably dressed young woman on a scooter rides around, with a good-sized lizard perched on the front of the scooter, steering one-handed, carrying a parasol in the other hand.

In a similar vein we have "La Sirena y su Marinero" (The Siren and her Sailor). She has wheels like a scooter and is taking her sailor for a cruise. Note how she sailor looks through a telescope, and she through reading glasses.

Packard and de la Vega's art has a multitude of facets, and one of them is folk art. A blend of Mexican and American folk art. It can be seen in this meter-tall statuette of Barack Obama. He looks strong and ready to carry on, but like all of us, with traces of some all-too-human anxieties. His chest cavity opens up (in a manner slightly reminiscent of a retablo) to reveal them. 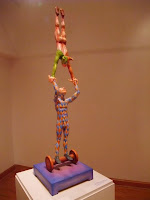 Here we see a classic theme from early Modernism, the Saltimbanques. Many of these works show clear classic Modernist qualities and motifs through the lens of Packard and de la Vega's cultural cross-pollinated vision. In reviews here we have seen the return of the Saltimbanques in other works, particularly Arnold Mesches'.

Again, we see the circus performer here, this time a juggler. Titled "Los dos Gallos" (The Two Roosters/Cocks). The juggler is astride the rooster, cock and cocky, the balls in mid-air threaded through a wire, giving the illusion of time passing, similar to du Champ's "Nude Descending a Staircase". Many of these works are of unusual grace, and this one extraordinarily so.


The works of Packard and de la Vega mix wonderfully with these acrylic paintings. Several statues are life-size, such as Madre Tierra (Mother Earth), whose head sprouts vines instead of hair, and the Zebra previously mentioned. Smaller works, such as El Mago (the Wizard) and Bufon Sorpredido (Surprised Jester), have a similar effect, packing a lot of detail into less space.
Originally, the sculptures were made with a cast paper technique that is similar to papier mache. In time, this technique evolved to include metal, wood and fabric, among other materials. These elements work to give the statues a lifelike quality, mixed with unique surrealism.
Both artists draw from their experiences in Mexico. Packard spent 28 years in the country, and de la Vega was born in Guadalajara. The two met in Tonala and collaborated on several works together before moving to the United States in 1985 to continue their artistic endeavors.
"In our works, we have some Mexican culture, and at the same time we have some American culture. We try to mix these two together, with a little humor too," de la Vega explains from his Gulfport studio.

Ricardo de la Vega was born in Guadalajara, Jalisco, Mexico in 1954. He graduated from the Instituto de Conputacion in Guadalajara with a BA in 1972. He then began an independent exploration of various media. In 1981 he began a serious study of cast paper techniques with the Mexican master Sergio Bustamante.

After completing studies with Bustamante, he set up an atelier for cast paper in Tonala, where he worked in collaboration with fellow artist Felipe Packard, producing a body of work inspired by ancient Mayan and Aztec designs.

In 1985, de la Vega moved to the US and focused on drawing and painting, setting himself an ambitious schedule of independent study. During this time, he continued to create and exhibit works in a wide range of media.
an image by felipe packard
Strolling in the Park
Mixed Media, 2007

His collaborative work with Felipe Packard has been exhibited in museums and galleries all across the US and Mexico.

Felipe Packard was born in Rockford, IL and moved to Guadalajara, Jalisco, Mexico when he was fourteen years old. He studied Philosophy and Letters at the Instituto Tecnologico y de Estudios Superiores de Monterrey, Nuevo Leon, Mexico. He also studied at the Universidad de Guadalajara where he received an MFA in 1980. His thesis, An Introduction to Mayan Art, was selected for publication. In the early 1980s, Felipe moved to Tonala, Jalisco, a town famous for its craftsmen and pottery since before the arrival of the Spaniards. In Tonala, he collaborated with fellow artist Ricardo de la Vega, creating a body of work inspired by ancient Mayan and Aztec art.

Felipe moved to Florida in 1985. Living in Gulfport since 1990, he continues to produce cast paper/mixed-media works of art with Ricardo de la Vega. Aside from the collaboration in 3-dimensional works in cast paper, Packard and de la Vega also produce paintings, each having his own distinctive styles.

A statue of President Barack Obama, standing in a dignified pose, titled The Audacity to Dream, borders on kitsch in its literalness. His chest opens like a cabinet to reveal a little piggy bank and a collage of timely headlines. The chest "cavity" is also used for Mr. Green Thumb, a dapper man (thumbs painted, of course) whose innards are equipped with gardening tools and seed packets. The best works have more mystery: A figure in jester costume declaiming in Soliloquy and another atop a rooster, juggling balls in Los dos Gallos (The Two Roosters) are two examples.

Both artists draw from their experiences in Mexico. Packard spent 28 years in the country, and de la Vega was born in Guadalajara. The two met in Tonala and collaborated on several works together before moving to the United States in 1985 to continue their artistic endeavors.
"In our works, we have some Mexican culture, and at the same time we have some American culture. We try to mix these two together, with a little humor too," de la Vega explains from his Gulfport studio.