Michael Peart makes steel furniture, sometimes with wood and leather accents. The metal is stressed to show various colors outside what one would associate when thinking "steel". Nor forms. Peart has no problems getting the material to do his imagination's bidding. They look light, airy and playful. No one will think "Ikea" when they see this, nor does it look like the usual exotic wood furniture found in custom studios. This is really different.


One thing about the pieces in this show is that they are based on a fairy tale he and his assistant wrote. This is narrative custom furniture. To synopsize the story, there's Priscilla, "a beautiful, effervescent goddess" who used her charms to get everything she wanted. Her unbridled Princess-hood uncharms the townspeople, who decide to ban her. To contain her, they build a steel castle and use it as a trap. Once lured in, she's enthralled with her new digs, which whisper to her, and of course, the doors close behind her. To the amazement of the townspeople, the grounds outside the castle turn to steel at that point. Inside, Priscilla becomes fascinated in a narcissistic reverie by a large mirror. Hundreds of years go by and the legend of the steel castle is found to be real when the place is discovered. The place looks just like it did when Priscilla was trapped, but she has turned to steel in front of the mirror.

[There's a cautionary tale there for up and coming Princesses, but I'll let it go...]

Michael made steel furniture in Seattle before coming to St. Pete. He has work on display at Rob Davidson Fine Arts, at 1101 First Ave. N., where this show is situated. The artist works in that middle ground between function and non-function. The chair on the right is a perfect example. It has elements tying it to automotive forms, complete with fender/armrests, fenders and headlights, one of which doubles as a drink holder.

The works have a decided architectural look to them. They are structured and beautifully engineered. This is not by accident.  Michael tells me that his inspiration comes from the Spanish architect Antonio Gaudi'. [Link], [Link], but he has taken that in his own direction. It's more of an attitude towards what is possible and the affirmation of the human spirit. 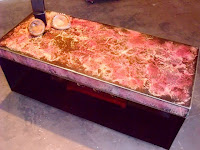 This "Slim line steel-topped cocktail table" is a good example of the range of colors Michael Peart achieves working on steel. 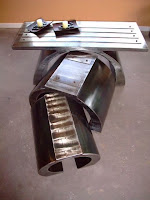 This set of nesting tables (the two in the foreground slide right into each other's arches), titled "Birds of a Feather" is extraordinarily beautiful in design and execution 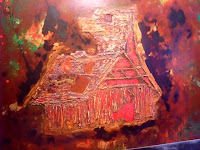 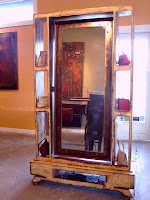 Michael makes more than furniture. On the left is a mixed-media piece titled "The Ruins #1" about 3x4'. His mastery of steel allows him to use it almost like paint, with a character of its own.On the right is a large "Priscilla Mirror" with small shelves on either side.


Michael can be contated at [Link].

Congratulations to Michael Peart and Lucy, his assistant, for a good show, and to Rob Davidson for hosting it.
Posted by Luis at 1:01 PM