There are four large murals in progress, two in St. Pete, one in Tampa. On the left is the Tampa one, a re-paint of a landmark mural by the original artist, UT professor Carl Cowden. A postcard view of Tampa that was originally painted decades ago, was accidentally ruined and the building's owners contracted Cowden to re-do it. Look closely in the picture and you can see the artist painting on the scissors lift. He was being assisted by his two sons.


The artist Dolla, from Orlando, has a few paintings in the current graffiti show at the Morean. So does the other artist involved in this collaboration, Acud Akut, whose work has been featured here before. On the right we see the mural, with the repeating face that Dolla calls "my doodle guy". in between the faces, you can see tags by Akut of the names of each artist. Note how the center head is like a meld of the other two, with three eyes.


Here's a frontal view from across the street... 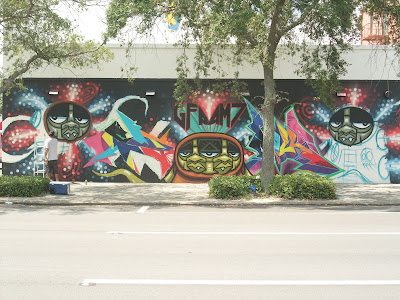 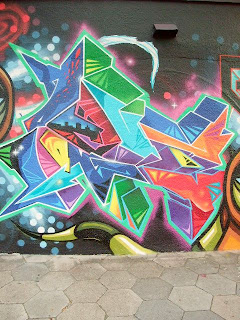 One of the tags by Acud-Akut. 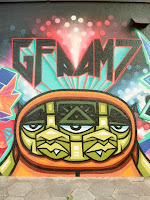 The middle of the mural. The letters above the head are the respective letters for the crews of Dolla and Acud-Akut. This mural is on the side of the Morean Hot Shop Facing 1st ave N.


A third mural in progress, this one seen in the Venture Compound on July 4th. This is by Christian Thomas, and is invisible from outside the compound.


The fourth in-progress mural is on the 600 block of Central, on the S. side of the street at a wall perpendicular to Central Ave. I've seen the drawing on which this is based. There's a lot more to come.