Paula was awarded a Human Rights Award from the Tampa Hillsborough County Human Rights Council in 2011, and was nominated for Woman of the Year in  Community service.


An artist like this, who uses an interdisciplinary approach and wears many hats forces us to re-evaluate how we define the role of the artist.

The Wear White show at Artful Living was multidimensional, with wall art, sculptural fabric works, people wearing white clothing which was painted, a photo-booth, Christian Thomas doing live Graffiti behind the building, and Jacqui and Anna performing interpretive dance pieces around the art.

Polly/Paula and Jacqui recently returned from a trip to India. I had the pleasure of talking at length with PZ about the trip. As with so many trips to that enchanted country (and Tibet), there were mystical experiences. The artist is incorporating these and feelings about the journey into her art.This can be seen in the painting on the left, titled "My Dance in Delhi". The painting is in part about an encounter with a Holy person, and being spiritually ecstatic during this trip. The sense of a mystical experience, the eyes being held out by the shaman figure on the left, and weightlessness and release of the figures are palpable. 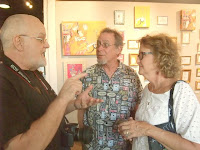 There was a good turn out at the opening. On the left, starting from the right, are photographer Patricia Preston Warren, Musician and entrpeneur Rick Mastry, and Clint Thomas, printer at Rob Davidson Fine Arts (RDFA).


"Flying Heads", an acrylic on canvas (also available in giclee' version) consists of a large feminine figure with her hair ending in circles with black dot centers, which are kind of repeated at the top of the skirt, and turn into spirals towards the middle to the bottom. Dangling from the skirt are the circles. now with star points emanating from them. On her sweater are three crosses, two with the black dots, five flying heads look back at her, and a small man dangles from one of two floating crosses. These have overtones of Chagall in the the forms, and sparse, economic style. 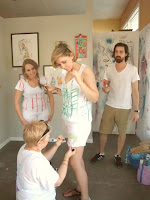 In a side room, people who wore white had their clothes painted (w/ markers). This was a popular thing, as many children and adults lined up to have their clothing turned into bespoke art.

This is the beginning of the Street Art that Christian Thomas painted live behind the building. It was done melding styles with Polly Zoom.


Then there was dancing. Jacqui and Anna performed an impressive/expressive/ interpretive series of dances around the work. In the picture at left, that's Jacqui on the left and Anna on right.

And PZ joined in the dance herself. Here she can be seen dancing with Anna in the main gallery at RDFA. That's PZ on the right in both pictures. 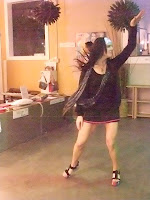 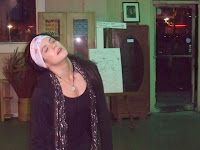 On the right and left, Anna Rawson dancing. 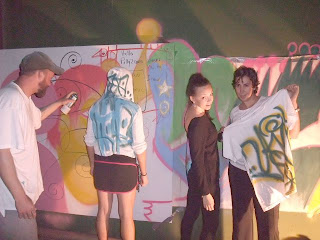 Christian Thomas (with spray can in hand and cap) Live Painting a garment on Anna Rawson. Jacqui with unidentified woman on right, holding another shirt spray painted/tagged by Thomas.