First, a Happy Birthday to Jill and the General for their first year of owning and running Tampa's premier private gallery space, Hoffman Porges Gallery.

I'll  leave the title to this show alone, but it is about the work of Greg Latch and Ray Paul. Latch is a Tupelo, Missippi native who started painting at a young age. He recalls watching his grandfather paint landscapes and painting with him. He was also drawn to paint comic books as well. After becoming frustrated with the starving artist lifestyle he became a nurse in 1989, and traveled. He has been a member of the YAA for years and had a studio in their space. Before that he was at Artists Unlimited for 13 yrs. He considers himself a folk artist, Surrealist Cubist and "...a combination of everything else".

Greg Latch and I stood at the railing on the catwalk of the gallery looking out over the lower level, with tables of food and drink surrounded by people milling and talking, taking it all in, the way they form arrangements, cluster, pause before paintings, geometries and colors crystallizing and dissolving, knowing we are part of that. He mentioned Du Buffet, and in the blink of an eye I am transported to Chicago, to the Du Buffet titled "Monument with Standing Beast", across from City Hall. I recall endless moments spent standing in it in the snow. Another form rising and falling like blobs in a lava lamp on opening night as rain fell steadily outside.

Latch told me he'd thought about time machines, about going elsewhere in time. Paul, a few feet away, smiled a knowing smile. "Where and when would you go"? I asked Greg. Looking down, almost sheepishly, he said: "Paris, 1920's, Montparnasse". Straight out of Woody Allen's worst movie, he says. I know, and just a few days ago I asked someone else the same question and received the same answer. Latch has a painting titled "Time Machine" in the show. In three wood panels, it has levels, modern cars and an older one from the 1920's among roads that crisscross, coiled forms and repeating ones. Time folding and unfolding. 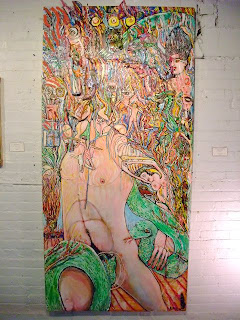 Greg Latch's work is a fine example of horror vacui art. Note every square inch of surface area is used, filled in with details and if you look closer, there's more detail to be had. Their density is one of their signature qualities, no matter what their size. Greg has studied Joseph Campbell's books on mythology. His painting depicted at left, "Hercules the Pinhead (Demi-God)" is informed by Campbell. It is so crammed with figures, lines, colors, and more that pull back ten feet and parts deconstruct into patterns. 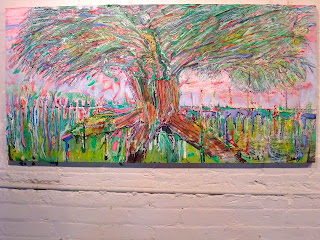 This painting of a tree, titled, "Tree Series 1", like most of Latch's works is mixed media. Energized, almost prismatic, with a wide canopy and strong, sure-footed roots. In its shadow, flowers bloom.
From a mythological viewpoint, this could be the World Tree.

As a child, Ray Paul painted horses in Cincinnti, his hometown. One visit to Florida and he wanted to come back. A second-grade teacher saw his potential and encouraged him. College brought him to Florida where he earned a BA in biology. Later, he returned to Cincinnati and received an MFA in painting before coming back to live in Tampa. He and Latch have been friends since 1995.

Paul's paintings start out with drips of paint a la Pollock, broad expanses of color that later are overlaid carefully with layers of contrasting color forms. The saturation of the colors is electric. Paul describes his style, in part, as Abstract Expressionism, surrealism, pop art, psychedelic music and more.. In his case, highly individuated and recontextualized via the biology education. Some, like Fibrous 1", look like tissue on a slide under a microscope.

If you look carefully around the edges, Ray Paul is beginning to include some small figure outlines.


Ray Paul has painted many electric guitars in a series he calls electrophyles. Like the rest of his work, they exude life energy with their vibrant colors and apparently freeform designs done in this case with acrylic, latex and enamel. He has several electrophyles in this show.

Laced with tropical colors, "Hula" has a sense of motion about it. Note the bright, but carefully modulated colors in the piece. One can seize on a particular color and see repetitions and rhythms.


Part of the sales from this show go to the Amanda Lee Fund at Moffit Cancer Center, where Paul is currently undergoing treatment for High Grade Malignant Fibrous Histiocytoma.

Congratulations to artists Ray Paul and Greg Latch, Shiver & Shiver Productions, Jill and the General for a good show.