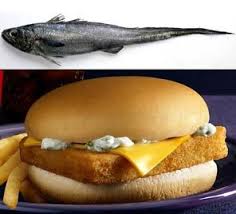 Lennie Bennett, art critic for the Tampa Bay Times, writes a paean about (sitting down?) the Mc Donald's fish sandwich as the "near-perfect indulgence". It is made from a real fish from New Zealand called the Hoki that will soon go extinct thanks to (you guessed) McDonald's suppliers overfishing.

The Filet-o-Fish has its devotees.

"Cops said an irate man crawled out of his car and into the drive-thru window of a McDonald's in New Jersey just to get his hands on a Filet-O-Fish sandwich.
"His Filet-O-Fish was taking too long at 4:30 in the morning," South Brunswick Police Detective Sergeant James Ryan told NBCNewYork.com.".

From the 3/10/12 Crunktastical.net: "Canton, Mississippi police say the 36-year-old shot a manager at McDonalds in the arm after ordering two Filet-o-Fish sandwiches and discovering that only one was in the bag."

23% of all Filet-o-Fish sandwiches are consumed around Lent. People may not be going to church, but they go to Mc Donald's.

Here's the tie to art in all this...the Radiology Art Project. Then-medical student and artist Satre Stuelke did a series of images made with X-rays of ordinary objects, including the Fish Sandwich, to give people a different and more scientific view of these things. He also used CT and MRI machines.