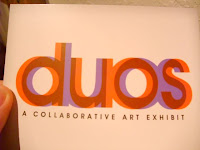 Chad Mize and Philip Clark own Blue Lucy, a combination graphic design business and art gallery. They have been steadily improving the quality of their shows since the installation at the PODS farm on Dec 31st, 2011, at First Night for 2012.

Scratch The Surface, which was the show preceding the one being reviewed in this blog post, was very well received.

Duos is a collaborative show. The following artists paired up:.

Collaborations can be risky business. With some artists there is an intensive melding, others work independently on the piece(s) and there's everything in between. Outcomes vary from the negative, where the result is lesser than either artist would independently produce. Sometimes there's a sum zero, and rarely true synergy, where the work is something neither individual would do on their own.


Daniel Mrgan and Calan Ree were in sync from the outset. Both have been working with themes along the same lines in some ways. They have independently explored the significance of life through its quirks, fragility and ephemerality. This came across to me as being about vision,
specifically insight.

Moi and Melissa Loera, a married duet, have had very distinct styles since I first met them. Here we see a stylized Taj Mahal-like building, with a bright feminine pink color in the windows on the back of an elephant. The Taj is a magnificent mausoleum built by an Emperor to house  his third wife. Inside, near the center, is the tomb. It rests on a more realistic elephant who bears his considerable burden with dignity and plows on. A collaboration about a duo.


A post-apocalyptic Adam and Eve in a dystopian paradise. She is blue, skeletal and talking, he muscled and looking more than a little like Aquaman.  Sean Williams and Joe Lemire worked well together on this one. 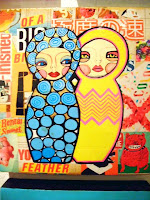 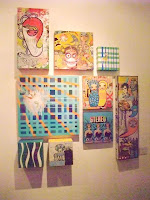 Philip Clark and Jennifer Kosharek worked by walking these works back and forth to each other. The result is a cluster of works as seen on left, titled collectively: "Every Day is Tomorrow". A good blend of two graphic styles. 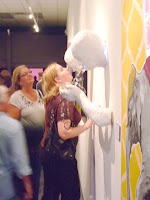 Congratulations to all the artists and to Blue Lucy for a good show. 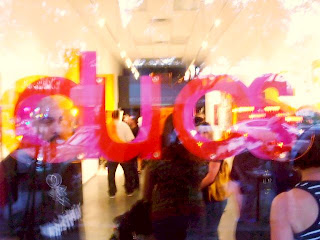