We live in a particularly apocalyptic age. Apparently there is an attraction to being present when the Big Top folds and levitating when the Rapture begins. The Mayan calendar and others say that time or the world ends on December 21st of this year. Innumerable books, TV shows and websites have sprung up to hype doomsday. The Mayan Apocalypse is the new Nuclear Armageddon.

A few artists have approached the countdown to The End of Time. The work goes from serious doomsday gloom to satire and humor. Others have looked at other hypothetical apocalypses. For example, Richard Allenby-Pratt's Dubai: Abandoned, circa 2017, a photographic series  about a fictional scenario where a cheap, viable alternative to gasoline is developed, putting the owners of the oil fields out of business, the area becoming an abandoned ruin. See here [Link]. 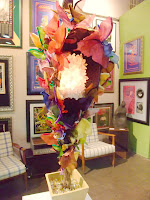 Artist Donna Isaac's vision of the apocalypse is a positive one. She sees this not only as an end, but as a new beginning, a potential rebirth for mankind. Her background is one of healing and expanding human potentials. On both sides of this text is one example of Isaac's work, a shrine-like shell on a pedestal housing quartz (?) crystals lit by LEDs that change color, gilded with flowers.

The work in fact welcomes the date and suggests that what happens depends on how we look at it. On the left is "Mind Talk", a mixed media work made from maleuluca bark, ribbons, fabric nd a growing plant. With each artwork there is a New Age-y affirmation style accompanying narrative. For "Mind Talk" it reads: " What we focus on, what we put our energy on grows. Where are we choosing to focus our minds and words? We choose consciously or unconsciously. Let's choose wisely."

In "Mind Talk", we see what looks like a pod holding a living plant. Green ribbons dangle below it, like roots reaching for fertile ground.

"True Heart" is another enclosure with a glowing seed-like heart in its center. The exterior is covered in lace and the inside in soft-looking cloth, visible through a yonic gate.
These are very meditative works, this one would benefit greatly from subdued ambient lighting.


Ms. Isaac's "Light Being" is about the ultimate stage of spiritual evolution and the idea that this turning over of an era or age could usher a spiritual rebirth for humanity. This sculpture hangs from the ceiling like a corn husk, with a human arm breaking out of it, like a chick breaking out of its eggshell. Like all the others, it is an image of hope.

Congratulations to the artist, Donna Isaacs and Rob Davidson and Mandy for an interesting show.

PS.  They are now carrying art supplies at Artful Living, and are having a sale.