Out of The Woods: Charles Parkhill @ HCC Dale Mabry


Standing in HCC Dale Mabry's Gallery 221, surrounded by Charles Parkhill's wooden sculptures, he and I talked about titles and how easy it is for them to become restrictive and narrow the possible range of potential interpretations of a work. Parkhill takes this seriously, making sure they leave his elegant sculptures room to breathe in the viewer's mind. One of the sculptures in the show was untitled, and viewers could suggest names for it.


About a year ago, on an uncritical mass bicycle ride in Seminole Heights by Susan Gott Glass, one of the stops on our tour was at Charles Parkhill's gallery-in-a-house. In every room there were his abstract wood and sometimes mixed media sculptures. It was a little surreal, this stealth gallery packed with sculptures in the middle of a quiet neighborhood block, with 30+ people in lycra milling around awestruck.  Parkhill uses recycled materials salvaged from construction sites, houses, etc.

On the left is "Vestige". About four feet tall, it is an abstract sculpture, like all of Parkhill's work. A long, slender triangular form, coming to an edge at the bottom, and widening a bit toward the top, which has a cross brace and a back to it. It can be read as narrowing, almost disappearing, or emerging, widening at the top. Like several other of the sculptures in the show it has a palpable music-like resonance.


Parhill likes to have several pieces in process at the same time. It is not a linear method. Working with wood, there are times when things are drying, or as he said, you reach a dead end with one, and go to another. Works feed off one another, too. This listening to the work is something Charles is attuned to. There is considerable sensuousness to many of these works. The literal centerpiece of the exhibit is on the left in the foreground. Constructed from spliced pieces of chairs, a double sine wave connects with two wooden hoops. The connecting piece has a delicate, beautiful sensuousness. Expertly lit in Gallery 221, the reflection on the floor heightens the feminine curvatures of the piece. Those end hoops not only provide a solid base, but also turn the viewer's gaze back-and-forth. Formal and minimal, these works are relatively lean and deceptively simple.


"Bella" is the piece chosen to represent the show in postcards and the web. It is a chunky, ripe-looking form with a bit of French Curve in it. About four feet tall, a bit longer than that, rounded at one end, pointy, edgy and linear at the other. Charles mentions the curve reminds one of a woman. Then he digs into one of his pockets and brings out what appears to be a two inch long model of the work. Not exact, but very close. He tells me he found it on the floor while sweeping his studio, a scrap from another work, and it inspired the bigger version. 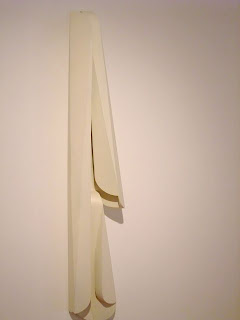 One of the things I like about HCC Dale Mabry's Gallery 221 is that the artists usually give a talk and there is a question-and-answer session afterwards. A student brought up this work, titled "Angel Wings". Here the title appears to pin down the work, but does it? First, it is very minimal and abstract. To me, it is an ascendant, poetic form with delicate edges.
If I look at it literally as Angel Wings, they seem to be hanging from an invisible hook or nail. They remind me of the movie "Wings of Desire", where an angel gives up his wings and job out of love for humans and one particular woman.