The Pink Art show at the West Tampa Center for The Arts was a breast-cancer awareness raising and fundraising event. Moira Shiver and her crew put together a show in the vast 2nd floor hallways and two galleries focused on the female human body. There was a book-signing by Moira's sister, author Mackenzie Crowne, who wrote a book titled "Where Would You Like Your Nipple?". There was also a scavenger hunt, for which I arrived too late to see.

Alicia Everett's "Inside Out" , a 13x16" mixed media work using watercolor, pen, colored pencil, embroidery threads, beads, snaps, washers, o-rings, wallpaper and ceramic (!), has to do with a microscopic view of breast tissue , but as an abstraction, it is dazzlingly beautiful.


"Cancer Scare", by Mishou Sanchez. A woman looks at the viewer. Note how asymmetric the two sides of the face are. She looks between shell-shocked and determined. Around her neck, a set of keys. Look closely, that's not a flower on the black table (?) behind her, but a heart cut in two.

On the right is "Hula Hoop", a smiling woman from a  viewpoint that makes her look like a little girl, wearing boy shorts, visor, sandals and a bikini top, arms extended, keeps a golden-yellow hula hoop spiritedly going by poolside. This embodiment of femininity, vitality and playfulness is Sneary's wife. 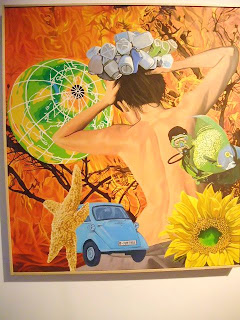 Global warming, garbage, and other despoilments of the environment are alluded to in John Gurbacs' oil painting Ms. Ozone. Note the broken sunflower in the lower right corner, the Blue BMW Isetta next to it (a minimal impact car on the environment) and a green earth. This, like many of Gurbacs' works are exquisite paintings. 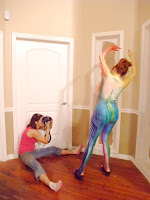 There was body painting at the show. This is a SFW photo. The model was painted like those in photographs of painted models shown in the hallway of the WTCA.

Congratulations to all the artists, Moira Shiver and the West Tampa Center for the Arts for a good show about a theme affecting a lot of women.