Galeria Bohemia on Central Avenue in St. Pete, shows Cuban artists, and not just during Hispanic Heritage month, or out of towners. This month he is featuring Ernesto Piloto Marquez, who has been reviewed here before.

Ernesto is a Cuban-born artist. Originally a pastry chef, he harbored dreams of becoming an artist, which he has fulfilled. His work is philosophical, reflecting on three of the big questions in art: Who are we? Where do we come from? and Where are we going? The art has the rare quality of fusing language with visual elements into complex, counter-weighted narratives, the main focus of which is being true to oneself.

Ernesto Piloto-Marquez raises questions with his paintings. In this one, a mixed media piece, a eyeless clown, dressed in a top hat, red nose, jacket and striped bankers' pants, juggles the earth. A comment on the banking debacle. Daring, political, shrill in tone, and with unbridled passion this kind of energy  typifies his work. A classic image for our age. 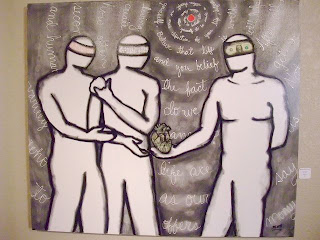 In "The Offer" (On left), we see one figure offering a human heart to the other two. In the giver's head is a dollar bill, and his heart is covered in dollar bills as well. There is one heart and two recipients, one has death o his mind, the other life. The words spiraling out from the top are poetic instructions for living a dignified, independent, humane life. 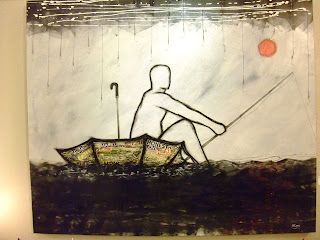 There is a strong surreal streak in some of the works. In the one depicted on left, "Fishing Dreams", we see a fisherman floating on dark waters on an inverted umbrella. If you look closely at the panels, you will see collaged words on each one. From the sky dangle several hooks over the fisherman, just as his own does above the fish, underwater, all below a hexagonal sun.

It was a pleasure seeing and talking with Ernesto and his wife. His work is consistently evolving and its creative energies remain at a high pitch.

Congratulations to Ernesto Piloto Marquez and Galeria Bohemia for a very good show.