The Crafty Hag, aka Coralette Damme holds a famous once-a-year art yard, or yart, sale. This has built up over time as an arts event on its own right. This year Coralette brought in Matt Deterior and Calan Ree. All three are no strangers to these pages. Here's a few pictures from the sale, which was well-attended. 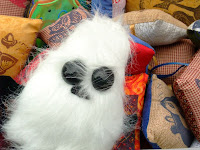 As with most garage sales, there were waves of people coming and going, some buying stacks of stuff, others a handful. There were deals to be had, and some heady discounts. There were er...oddities. I think the doll at left was a larval Yeti. 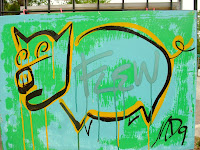 Matt Deterior brought a lot of t-shirts (I bought one) and his unique and abundant energy to the sale. Here's one of his stands by the street, and one of his paintings on the right. 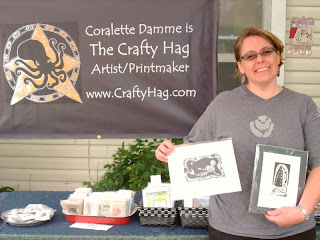 Here's the originator of the Yart Sale, Coralette Damme with some of her print work. Yes, I bought both of those. 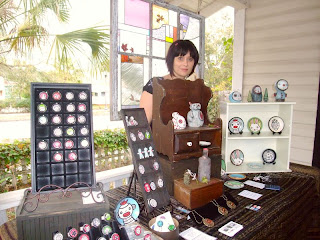 Here's Calan Ree and her beautiful work (a few pieces found their way into my house). 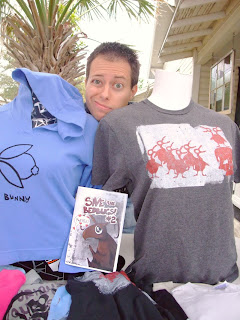 Matt Deterior with his bedbug coloring book and t-shirts, making a face, looking like one of his drawings. We took a break from the metaphysical chat for this portrait.

The Yart Sale was a wonderful time, a chance to get some small works at bargain prices, and a chance to hang with this stellar and talented trio. Thank you, Coralette, Calan and Matt!