What More Can You Hope For? Tina King @ Cafe Bohemia


Tina King hails from Alabama. She attended the Memphis College of  Art (as have two other notable artists in this area). The painting on the right side of the picture on left,  "Nagasaki", shows a nuclear mushroom cloud in the background. In front, a child-like figure holding a cell phone looks at the viewer. One of Tina's themes is the unchecked proliferation of technology. She reminds us of its human measure.

These paintings are parables on the accelerating pace of technological change and the lag in socio-cultural change, which has always existed, but has become much larger and contentious in our time. Cell phones and nukes leave us shell-shocked and gasping to take it all in. Tina's work has a solid foundation in realism which is one of the things that make the departures from it strong. Another theme in her work is feminine empowerment.

Cafe Bohemia is one of those places that is greater than the sum of its parts. It multi-tasks as a cafe', gallery, micro-concert venue, movie plein-air theater and more. Diverse talent in a variety of media play and show there. Both exotic, cult types from the national scene as well as the grass-root variety. 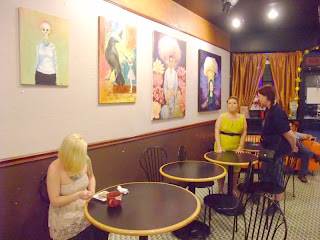 Congratulations  to Tina King, Matt and Cafe Bohemia for a good show.


What More Can You Hope For? Tina King @ Cafe Bohemia - Paintings and works on paper by Tina King, who's been reviewed here before. Opening Saturday, March 10th, until 10 PM at Cafe Bohemia, 937 Central Avenue, St Petersburg. Through April 1. Free.
Posted by Luis at 4:56 AM