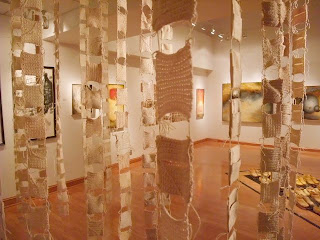 In the interests of full disclosure: I am part of one of Judith Salmon's works in this show.  "Memory Pocket", pictured on left, is a series of knit pockets dangling curtain-like in rows from wooden branches. Viewers are invited to write out memories on slips of paper and insert them into the pockets. At Salt Creek Artworks, this work was shown in 2010 when it was smaller. I wrote a personal memory and slipped it into one of the pockets. This is one of Judith Salmon's core concerns: Memory. Personal and geo-cultural memory. In the "Pocket", aggregate memories of various viewers across time and exhibits link up over time incrementally within the work, becoming a kind of DNA of memory. These interlaced and layered connections, over people, culture, time and place run through Salmon's work.

"Travelers All"  consists of the outline of a boat's hull, echoed by a black inner compartment, lined in stalls (?) and in each one is a pair of feet cast in wax. They are hollow, and inside them are little dark near-spherical forms about 6mm in diameter. They are allspice. The artist explained that most of the feet are hers and that this work is, in part, about the migrant experience. Originally, I understand the work was created elsewhere, and the boat outline was composed of tree branches from where Ms. Salmon resided. I get the feeling from this that we are all in the same boat. The ephemerality of life and its relation to time come through here as it does in many other of her works. Time is not sidereal, metronomic, oscillations of a quartz crystal, or a decaying isotope. It's measured in heartbeats, stories, things shared and lives. The feet are vessels within a vessel. 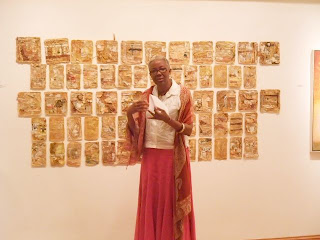 On the left is a photo of Judith Salmon and behind her, "Palimpsests", a sixty piece installation, each comprised of collages and wax. The word refers to writig or something else that has been altered, yet traces of its earlier incarnation are still discernable. Some look like layered fossil forms, others like scrapbooks caught in a flood. Time, layered like sediments, measured in human terms.


Leslie Neumann works with encaustic, a method involving oil and hot wax, which has the advantage of drying very quickly, and one of its qualities is a distinct, translucent luminosity. The latter is something Neumann uses in her work, which has been described as "cosmic". In "Songs from Beyond", this theme is evident. Several celestial spheres dance around a coalescing star, like Maypole dancers with gravity as the invisible ribbons tying them together. Taken literally, at first glance this appears to come across as a rendition of an imaginary system, or spacescape. It is not just a window into outer space, but also a mirror  into inner space.


Neumann's art is about transformation, interleaving realities, unity, connections, and the realization that the same laws and forces permeates everything around us and we are but their living expressions .
There's an analog to the transmigration of souls here with the transfiguration of form and energies (which appear different to us, but as Einstein illustrated, are the same thing). Some works, like "Concurrent Time and Space", have glass 3-D elements, stemming from a collaboration with Susan Gott, a very well-known glass artist based in Tampa.


"Suspended", pictured on the left, consists of an orange quasi-rectangular form encased in light, an incandescent blob rising and transforming into plants. There is a companion piece to this one, in which the orange wellspring of energy is risen on its own. Neumann came from New York, and currently lives on a water/marsh front home in Aripeka. In some of the works, her surroundings are incorporated into the cosmic.

In "Heaven's Echo", the terrestrial and celestial meet. There are spheres in the sky. Below, earth and water, in the form of marshland. There is a tongue of fire shaped like a tree rising to the evening sky on the left. The water's blue is as the evening sky above, and a few spheres meander just above the grass, all dancing in unison to the music of the spheres.

Ps. There are at least two hidden messages in at least one of Neumann's paintings.
Posted by Luis at 6:26 AM