One of a kind. Film on Film: Nancy Cervenka @ HCC Dale Mabry Campus.


How often do we see an artist that is working in a medium that no one else is? Yes, unique, one-of-a-kind that she invented -- and has been doing so for decades. Nancy Cervenka works with movie film, mostly by coiling and gluing it into various forms, though she has also woven it into a dress, one that won the Gasparilla Art Festival Best-of-Show. The dress is not a prop, but can be worn (just don't sit down, Nancy advises). It is stylish, woven and rolled from 8mm and 35mm film.

When observing these works, it is difficult to keep in mind that the medium is singular. The artist is so fluent in it, and has developed her own syntax with it. The only reason it doesn't have international attention is that the artist, by her own admission, has not pushed the marketing angle. 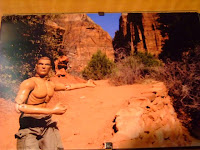 This is an exceptional show, with very strong pieces and a wide variety as well. It also includes photographic art works by Ms, Cervenka. They're concerned with the travels of a G.I. doll in the desert and to MOMA.


There are so many exquisite works in this show. In spite of their singular medium, they deal with the usual issues of art. The two horn/spiral forms on the left and their shadows in shades of blue in their sinuous matching forms speak of the mysteries of duality.

Many viewers used an available gallery loupe to peek into the films and see what they were about. One thing that stands out to this reviewer is the metaphorical relation of these works to time. Think of movies, frame after frame, at 24 per second. A perfect example of linear time. When Cervenka coils film into spirals, frames come in contact with other frames, and partially superimpose as well. Time becomes cyclical.

The work takes many forms and sizes. Some are over seven feet tall, spindly forms reaching up like spires straddling a cathedral. Others cascade along the walls. A few look like elongated Shofars lately, some have taken on a botanical (albeit extraterrestrial) look. There are very tribal-looking mobiles, too. 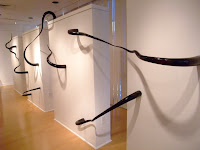 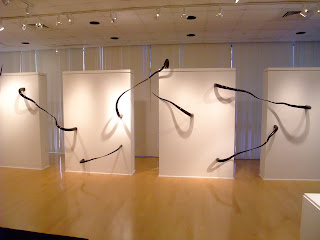 Gallery 221 is on the 2nd floor of the Library of the HCC Dale Mabry Campus. The wall that would be a window has been rendered usable for hanging arwork by the erection of four or five large sections of walls looking a little like the monolith in Kubric's 2001, A Space Oddyssey, although I was informed they're called "Pumpkin Teeth", a reference to Jack-o-Lanterns. On these, Cervenka had a site-specific installation. Very biomorphic conical forms emerged and disappeared back into the wall-panels, sometimes jumping from one to another, or diminishing only to connect with another. The effect for me was one of connections and the parabolic aspects of life. Lyrical, gentle, and rich with expression, the installation added a new dimension to Cervenka's work. From afar, they seemed to be living things, crawling, boring through, emerging and vanishing, and above all, persisting. 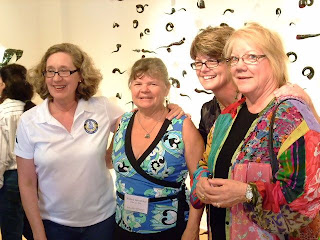