It's the brainchild of Kevin Hohl and Sean Carey, of HD Interactive, who have developed games, apps and consulted on other software products. This was not their first book. That was for Creative Clay. Sean Carey told me they really spent fifteen minutes to come up with the idea for this one. All the artists and work depicted below are in the Artbook.

They spread the word via artist friends in their own social networks and meetings at the Sake Bomb. Artists simply signed up to be in the book. There were six people who vetted the artists and pictures of the work. The vetting process for the artists was very light, tighter for the work depicted. Sean showed me the book on his iPad at the launch party. For each of the 100 entries, there's a picture of the artist, the biography they provided, and several pictures of their work.

On the left is Eugenia Woods, who has an art shop in the Crislip Arcade and one of her paintings, of a house awash by a flood. The colors are beautifully modulated and articulate with the form.


Since this digital "coffee table" book, as Sean calls it, did not fall under the Fair Use provisions of copyright law, releases had to be obtained from every artist. There are three versions of the product, a taster, a free limited version, and the complete one, which is available at the Apple Store, for $10.00. [Link]. HD Interactive plans on a droid version soon.
Nicholas Madrid, on the left, brought his realistic painting "Melissa". His skills as a designer/illustrator are evident here. Saori Murphy is shown with one of her paintings, but what Saori has blazed a trail locally with are her and her group's outstanding installations, two of which have been reviewed here.

This is also the pilot book for what they envision as a series of similar books in other major art markets.

Tim Gibbons and his "Stegasource", a dinosaur with abstract components visible x-ray style. On the right, one of Nikki Devereaux's self-portraits, mixed media pieces, a well-executed narrative tableau about a cosmic trip, or a vacillation about a relationship with an overbearing man?


The Launch Party was on March 17, in the parking lot adjacent to Studio 620. Many of the artists in the book were present, one piece of their work either hung up on the chain link fence, or  on pedestals. There was a food truck from Allessandra's Catering tucked in a corner, providing food and drink. The weather was perfect, the crowd sizeable, and atmosphere mellow.

B.C. Woo's social contacts linked a lot of the artists to applying to get on the Artbook. He paints fish as they are, not anthropomorpohosized objects, but in all their natural weird, potent colorful being. On the right, Samantha Churchill and one of her wound-aluminum wire scuptures, "La Chupacabra", a mixed-media piece that lightheartedly mocks itself. 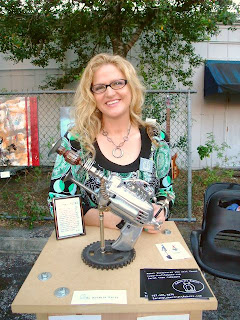 Sarah Thee Campagna and her "FSIII", a sculpture with a fictional narrative about being a found artifact, possibly a ray gun, retrieved from a battle site on Planet Mongo, and possibly belonging to none other than Flash Gordon. This backstory adds a specific fantasy aspect and cultural coordinates to the metal sculpture. Sarah also makes robots and flying saucers, all with a great combination of purposeful seriousness, humorous and/or elegant style, and metahorical implications about the present viewed through the lens of the future.

Being in the Artbook has no hierarchical meaning, but its primary importance lies in its being a snapshot of one hundred of the artists in the area at this time and a quantum of the history of the arts in the area. In my eyes that makes it a significant achievement. Congratulations to HD Interactive for a wonderful idea.