Abstraction means "to draw away from". The art world thrived on representation for a very long time. The invention of photography was instrumental in unseating the supremacy of verisimilitude. Art edged towards abstraction by degrees of independence from representation. Abstraction went from Cubism to Kandinsky and Abstract Expressionism. Abstraction subsided, but has enjoyed a resurgence in the past 4 years or so. The Visible/Invisible show at Tempus projects brings together local abstract art from Edgar Cumbas, David Williams and Kurt Piazza.


Piazza is a graphic artist who also works in a variety of media, with emphasis on video, installations and performance. There are several large, high-contrast prints by him of industrial structures in the show. Piazza has said that he believes that "architecture can serve as a metaphor for time and space". The history of space, too.  Deprived of mid-tones, these stark black and white large format Xerox prints depart from the usual representative or documentarian aspects of the buildings, taking away the usual clues, leaving us with outlines and a lot of blacked-out areas. This forces the viewer to leave behind the conventions of architecture and wander into new conceptual spaces.

There were four videos playing, "Video 237", "Blue Sequence", PROJ(3)3:12, and Untitled in a clever inset screen on the side of the gallery. I think there was some footage from The Shining, though recontextualized. 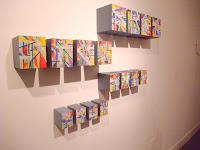 David Williams has a day job as a newsroom graphic design artist who does maps, charts, informational graphics and illustrations. He's also a musician, teaches, volunteers at Creative Clay and  makes his own art. In this show, he has sixteen painted blocks of wood looking a bit Mondriannesque, but with overlays, lots of diagonals, much more depth, repeating patterns and compartmentalization.

Edgar Sanchez Cumbas has eight paintings in the show. He is an acclaimed painter and photographer, held in very high regard locally, currently working on his MFA in a residency program in Cape Cod, maintaining a studio there and in Tampa. He was brought up in seven cities, and like many other nomadic people in history, I think he internalized his world, thus making it portable. The relativity of cultures must have also impressed itself upon him, and heightened his powers of observation. Sanchez-Cumbas has brought Abstract Expressionist themes into the present, amongst them issues of identity, perspective and individuation.


"Darker Shade", a mixed media work on wood with a variety of tan tones, looks like paint squeezed from a tube, and also like a reclining nude, but that's to me. The sinuous bends in it come across a a feeling of complexity, and thing turning inwardly. Sanchez-Cumbas reportedly said this and other paintings in the show had to do with a conversation with his parents about his daughter's skin color, which is a topic openly discussed in many Latin American households.

This exhibit is open until March 23rd at Tempus Projects, 5132 N. Florida Ave. Call 813.340.9056 to make arrangements to see it. A word of advice: When viewing abstract works it's a good idea to give them a little time, to get past initial impressions and allow them to wash over you and explore the stream-of-consciousness associations and feelings that arise.