This show was a long time in the making. Curator Leslie Neumann brought together Ann Taylor Gibson, Elise Wagner, Kim Bernard, Lisa Pressman, Russell Thurston, Laura Moriarty, Lorrie Fredette, Mary Beth Rothman and herself to this show. The result is an exhibit with wide-ranging styles that gives one an idea of what creative minds can do with this medium.


A few posts before this one, I listed several links describing the basics of encaustic. It involves the use of beeswax in which paint/pigments are suspended.

A week before the opening of the show, I visited the Morean to see Lorrie Fredette assembling her installation. Lorrie's work is based on her familiarity with medical issues. Her installation is a sculpture of smallpox viruses. In 1980 smallpox was declared eradicated world-wide, but its history and effects on the course of humanity are still with us. Presently it is feared as a potential terrorist tool. To protect Americans from that possibility, the government has 100 million doses of vaccine on hand, since many Americans today have never been vaccinated. This is far more than a representation of a group of viruses. They have a long history with us and cast a shadow into the present. The installation brings us all this, plus the intrinsic biological form of the viruses. They are made from wire armatures with muslin over them, which is dipped in beeswax and tree resin. Their surface looks and feels like soap.
There's a rectangular 3-D sheet of these virus sculptures in a roughly rectangular form, hanging, floating at eye level. The effect is oddly pacifying, lyrical, almost cloud-like, the forms at slightly different elevations, appearing to be emerging and receding. The viewers seemed to meditate on the form, wandering along the edge, with many, like me, crawling below the piece and laying on their backs to get a different perspective. Smallpox also played a big part in the history of the artist's home area: Between 1614-1617, smallpox killed three-quarters of Cape Cod's residents and became a part of its history.

Laura Moriarty works with pedestal-based sculptures, her works in the show involving geology and humanity's relation to it. Made of encaustic on panel, with geologically-themed titles like "Subduction into trench", on the left. In the several pieces in this show the contrast between geological and human time is a recurring theme. Geological layers, like overlays of time in various colors, reclaim and entomb human remains and traces. The overriding feel here is one of process. Natural process, and the disparity of scale between the human and geological. These works remind me of retablos with their small tableau and narrative qualities. 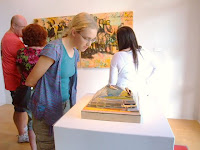 From the Dark Ages well into the religious colonization of the American continent by Catholicism, long before there were churches in smaller cities and towns, traveling priests were assigned their circuits and they traveled, often through dangerous country, from place to place, where they would baptize, confirm, marry, and offer last rites, or bless those that had passed since their last visit.  Besides their Bible, cross and cup, they would carry small, portable, three-panel folding altarpieces to set up effectively sacralizing the place. Ann Taylor Gibson's works in this show are in the form of portable altarpieces, from her Threshold series, in the original meaning of the word, of the partition between the threshed and everything else. The work pictured above has to do with her father. Ann told me the piano key laminates are from her father's piano. The music running across the piece is from Bach, the last one her father was able to play. The map behind the keys is a photo-transfer from one drawn by her father of one of his favorite walks. Above and below are small seed packets from Ann's own garden. 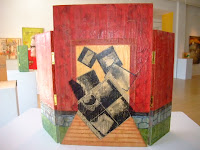 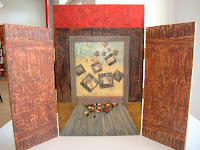 Another piece, "Threshold I" deals with her bout with cancer, literally showing a barn, its threshold, doors wide open, and receding into the outside, floating away, are pieces of medical data related to the cancer. Intimate, direct, personal shared life experience.


Lisa Pressman's paintings are focused on the signifiers of time and change. On the former, the difference in the temporal linear sequence in which our lives unfold, and their rearrangement according to significance in memory. This can be seen in the work. "Following the Path", pictured below right, has a horizontal line near the top. Note its division into segments. In talking with the artist, she confirmed this was connected to the idea of linear time. In others, we see circles related to cyclical time, time that repeats in cycles, not necessarily in exact ways, but in the sense of life cycles and/or lessons learned via successive approximations. Lisa's paintings are on a wall perpendicular to a window at the MAC, where the light skims along them in the early afternoon, getting into the transparent wax, racing along its length, leaking luminously.


The theme of time runs through many works in this show. Marybeth Rothman, pictured on the left with her encaustic and mixed media work titled "Regarding Eighty Pearl Street", works with her collection of found photobooth portraits combined with suggestive titles that prompt viewers to create their own fictional narratives.  Note the delicately colored washes over the photographs, adding emotional patina to that acquired over time.


Leslie Neumann curated this show. The diptych at left is from her "Cosmic" series. Neumann's encaustic art is about transformation, interleaving realities, unity, connections, and the realization that the same laws and forces permeates everything around us and we are but their living expressions .
There's an analog to the transmigration of souls here with the transfiguration of form and energies (which appear different to us, but as Einstein illustrated, are the same thing). She also does lyrical landscapes, some of which are also in the show, a few of which are also for sale in the gift shop section.


Russell Thurston says that if he hadn't become an artist, he would have been a scientist. He explores the mysteries of living things through his art. In "Midnight Bloom", an encaustic & oil on wood painting, we see a mandala-like bloom, its leaves in the Fibonacci sequence (like a sunflower, this pattern repeats throughout nature, including in our bodies). The rigidity of the pattern is spontaneously broken in a beautiful manner by the organic tendrils at its center. Thurston's work in the show seems to have some Eastern European influences, but I could be wrong on that.

Kim Bernard's work is related to physics. Those in this show are kinetic sculptures, made to be touched, and above all, played and interacted with. The "Readymade Color Wheel" is made from a bicycle wheel, balls coated in encaustic, attached by springs to the wheel's rim. Viewers are transformed into participants via interaction with the piece.

There is another work that is in the form of a pendulum that lies against the wall. By having people play with it, its arc of travel has been transcribed onto the wall behind it. 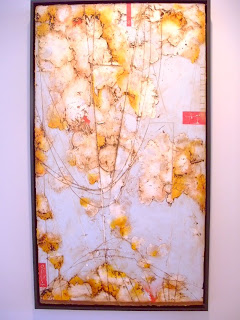 Elise Wagner's "Remnant III" appears to be some sort of  stunningly beautiful, quasi-floral geometric abstraction, busy with lines, orange-sepia washes, and a mix of parabolas. The title is the giveaway, if the viewer doesn't recognize what s/he is looking at. These are tracks, or remnants, of the routes subatomic particles took, how they crashed into each other, and the subsequent transformations and families of other particles they begat thereafter. This is at once a memory of an event and a family tree. 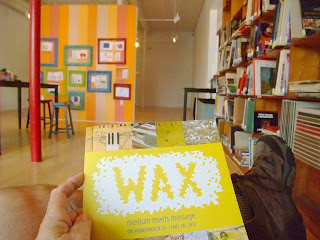 In this tightly curated show, we see a variety of recurring themes, dealing with the nexus between art and science and what they tell us about the world. Time, its manifestations in memory, motion, pictures, & the human heart. The morphology of living things, cosmology, geology, physics and much more. All the egalitarian laws that apply to everything in our universe. At one level, the works in "Wax" showcase the possibilities for the encaustic medium. As we have seen, they also go far beyond that. Congratulations to the nine artists, to Leslie Neumann for an unusually fine job of curating and simultaneously integrating many levels in one exhibition, and to the Morean Art Center for making it all possible.