The written word and the image. In many works this does not extend beyond the title, in others, like photographer Barbara Kruger, it is an integral part of the work. In Marianne Chapel's show at C. Emerson Fine Arts, it is a prominent feature in several of the works shown. On the left is Ms. Chapel's "(Don't Air Your) Dirty Laundry", an installation consisting of a basic clothesline set up with six lines of jute hanging between two poles made of pine. Hanging from the lines are tea-dyed sheets of paper with writing on them. 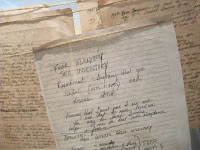 The writings seem to be diary pages, or pages from personal notebooks. Highly charged with emotional content, entries from specific days, temporal and topical inventories, some by year, some by categories. The tone varies between mild anger, calm detachment, and near-rants. Some are clearly exploring Christian metaphysics. The effect is a cleansing one. Once dirty "laundry", now washed and hung to dry.

In her artist's statement she says that what happens to the individual relates to things at the international (and perhaps global and/or universal) level. The saying attributed to Hermes Trimegistus : "As above so below" (or viceversa) comes to mind. In the written narratives there's plenty of drama, suffering, and the language of the New Age style personal development/growth/expansion ideology.

The emphasis on language can be seen in the series "Idioms, Synonyms, and Popular Culture Series", sixteen of which are in the show. On the left is "Eat Your Heart Out". There are repeating qualities to these pieces. They are broken up in sub-frames. Many have canids (dog-like animals) in them. See the small diagram in the lower left? They appear in many of these works. The picture of the house in the woods (which appear elsewhere as well). I get a feeling of introspective process, transitions, healing and phenomenology from these works.

Another sculptural work was the piece on the left, "Untitled". Made of chicken wire and paper, and approximately 3+ feet tall, these dress form-like objects carry a message in their forms. Note the center one has an idealized hourglass form, the one on the right is more human scale, and the one on the left even more so. 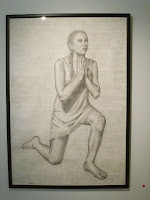 Three mixed large media (mostly graphite on paper) works under the title "To Ask For", #1, by Begging, #2, by Screaming, and #3, by Praying are one of the highlights of the show. On the left is #2, a figure of a woman in her underwear surrounded by flowers. On the right is #2, and although barely visible in the photo illustration, all around the figure is writing about personal tribulations from a feminine angle.

The #1, "by Begging" is a complex image, involving multiple images, layering, typed/printed text, a photograph, and more.


Marianne Chapel's "Victim Dolly", an installation comprised of pine, wax paper, burlap and jute is a formally strong piece, with banners dangling from the ceiling over a gurney with a burlap pillow with a stack of small (incredibly low priced) books on it. The banners have slogans on them, statements that seem like crazy-maker platitudes that counteract each other things that erode our self-esteem.


Congratulations to Marianne Chapel, to Lori Johns and C.Emerson Fine Arts for an interesting show.