I was advised to go and check out this new work. It's my understanding that it is on a legal wall, but until I'm sure, its location will not be revealed here. It was not under ideal light when I saw it, and I'll be returning on a cloudy day. The shadows make it difficult to appreciate. Works have been disappearing quickly, so I photographed it anyway, just in case. It is the better part of two stories high. Note the door frame at the bottom of the picture. It is a light purple-colored creature, with its head separated from its body. In its "paws" it is holding a green character and a yellow one...

...in the lower right, there's a green character with its head also sliced, with a sliver of flesh coiling between it and the body. Note how the painting seamlessly leaves the wall and extends onto a wooden fence.

There is another mural on the other side of the building. 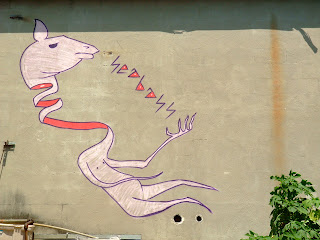