This is the debut show for the new director of the WTCA, Moira Shiver. With an impossibly short two weeks to throw together a show, there were a lot of Ybor Art Association (YAA) [Link] members's works present. Ms. Shiver has long been affiliated with the YAA, and her husband, Jason Shiver, is still its president.
The first thing I noticed driving in was the new, in-progress, fledgling sculpture garden by the side of the Santaella building. It's far from finished, but already has a few pieces in it, and there are big plans for it as a space for sculptures and social events extending outside the building.

This show was curated by Samantha Churchill, and Princess Rashid, who are current or ex-YAA members ( listed as members on the YAA website). 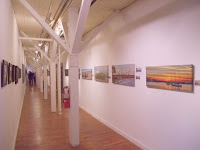 The hallways on the lower floor were lined with Santaella Studio Artists' works. As with any members/rent-a-wall un-curated display, there was inconsistency in the quality of work, and, of course, no theme to speak of. There were some very good works on display. Elizabeth Jeness-Burge's paintings of small (apparently) southern towns stood out for their chromatic sensitivity and somewhat abstract planar forms.


In the main gallery there were a fair amount of sculptures. Here's a trio of figures dancing, made of wire mesh by Ofra Friedman, titled: "Energy". They have a strong corporeal three-dimensional quality.

Marc De Waele's "Mystic Dance", a horned, caped figure engaged in what appears to be a ritualistic dance is remarkably light, made of hammered aluminum and sprayed chrome. He had several other sculptures in the show, many emphasizing the conceptual more than this one. 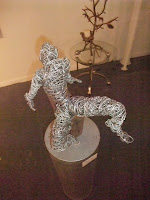 Samantha Churchill had at least two of her very expressive, wrapped-aluminum sculptures in this gallery. This one is reminiscent of the "Keep on Truckin'" Crumb character and is titled "Lazy Days".


We got a sneak Mishou Sanchez' upcoming show at Hoffman Porges. Here is a large (self?) portrait titled  "Cancer Scare". A woman looks at the viewer. Note how asymmetric the two sides of the face are. She looks between shell-shocked and determined. Around her neck, a set of keys. Look closely, that's not a flower on the black table (?) behind her, but a heart cut in two.

Besides starting on the sculpture garden, a roomy new gallery has been opened, near where the bathrooms are. It is called the "Churchill Gallery". It has 3-4 more artists studios, including Jason Shiver's, that have been opened. The effect adds a lot more exhibition space and encourages viewers to walk the length of the hallways.
Laszlo Horvath's photographic exquisite prints of seaweed stood out. Elegant and intelligently formal, reminiscent of a mix of Edward Weston, Irving Penn and Currier and Ives with
just enough color. 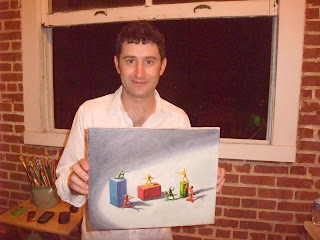 Brent Thorlton had just moved into his studio and had several beautiful and well-thought out paintings, this one I commented appeared to be influenced by Eric Fischl, and as it turned out, the artist studied in NYC under Fischl himself.


I want to congratulate all the artists in the show and studios. Moira's opening show was rushed, well-done considering the time crush, yet more of a transitional step than anything else. I look forward to the next one. The Santaella resident artists will be having a show of their own next.