The Tipping Point - Theo Wujcik: No U Turn @ HCC Ybor 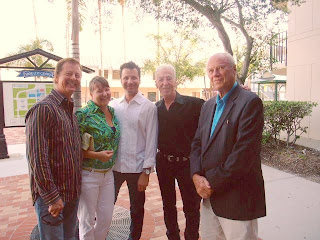 Theo Wujcik needs no introduction locally. He is one of Tampa's premier artists and has been for decades. For those not familiar with the him, this article by Megan Voeller in Creative Loafing provides a great primer: [Link].

On the left is a photo of a group just outside the building at HCC where the gallery sits. Theo is in black, James Rosenquist, with whom I had a chance to speak, is on the right.

The theme of "No U Turn" is global warming, a hot topic that has become a political signifier for some time. The issue has deepened the great divide between people in the United States, with plenty of name-calling and accusations. From the works in this show, you know where Theo stands, but his is not a histrionic viewpoint. It's not just about the warming itself, but the state of the situation. The warming and tipping point are also metaphors for other things in the artist's and possibly the viewer's life. You might find yourself in one of these paintings.

In his artists' statement, Theo explains that in media, pixilation is used to visually neutralize things that are unlawful, inappropriate and/or disturbing to view. The pixels in these paintings are not the usual kind of human shield. It's not concealing industry or melting glaciers. In "DeadlyCocktail", the allusion to a lethal mixed drink is related to people's attitudes, complacency in particular, to global warming.

In "Weeping Willow" Theo uses his well-developed comic-book style to great effect. In this monochromatic acrylic painting, violence in the form of unleashed forces of nature abound. Death, chaos and an apocalyptic tone are dominant. It transcends the literal. It's also an inner apocalypse, the outcomes of our denials, delusions, and apathy.


A yellow circle. No pixels here. To the left, an abstraction that to this viewer looks like a string threading through human skulls. To the right, an abstracted, sketchy figure holding on to a (steering) wheel, looking alarmed. On the surface, this is about the dreaded tipping-point, that moment when global warming becomes irreversible, and the outcome proceeds unabated. This is also about an inner, personal tipping point. Where does our apathy, denial, and  opinion become fixed? Our position one of rigor mortis? These paintings are like dreams. The landscape seems odd, distant, and alien, yet everything in them is you.

Congratulations to Theo Wucjik and Carolyn Kossar for one of the outstanding shows of this arts season. 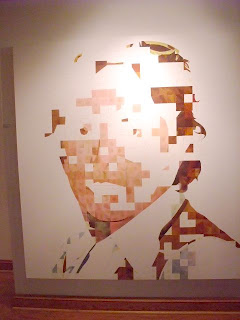 P.S. There is one painting, of Robert Rauschenberg, titled "Direct Hit", referring to hurricane Charley passing through Captiva and stranding Rauschenberg in his home/studio. The frequency and strength of these storms is tied to global warming, making this portrait very much part of the theme of the exhibit. Rauschenberg was a friend of Theo's. He passed away in 2008. Note how the face is "pixilated", though Theo also showed one of the preliminary smaller versions leading up to the finished work. It was done far back, with the fragmenting into squares having nothing to do with pixels. That came later.