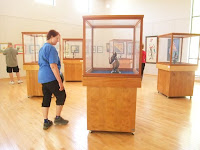 Dr. Seuss, aka Theodore Seuss Geisel, writer, poet, and cartoonist, published forty-six children's books during his lifetime. The Tammy White Galleries [Link] in New Port Ritchey, sole dealer on this coast for Dr. Seuss' work, together with the Alric Pottberg Library PHCC (pictured on the left) made this exhibit possible.


These are larger stand-alone art works as opposed to the illustrations found in the books. There were paintings and bronzes in the show. They embodied Geisel's playful, child-like nature and extreme attention to detail.

In "Pink Tufted Small Beast", an Escheresque ruin of perhaps a temple, mostly of stairs connected by sensuous forms, lead to the fantasy creature sitting at the end looking over the abyss. Note in the background upper right the volcano blowing smoke rings. The architecture is as important (or more so) than the figure the title alludes to, which is the usual over-the-top creature, ornate, confident, flamboyant and self-mocking.


"The Joyous Leaping of Uncanned Salmon" (also titled as "...of untamed Salmon") is a delightful abstract. Anyone who has watched salmon going about their business can recognize the genius here in portraying the form pared to its minimum and simultaneously formally mimicking the medium they exist in: water.


Note the sensousness of the landscape forms in "Waterfall". Bearing similarities to other backgrounds in his paintings, here it dwarfs the figures which are approaching and on the arch bridge. The waterfall is minimal, almost a distraction, and it goes through two cascades, the last one a trickle which has worn a hole in the arch. Again, a volcano in the background, but here it is in the midst of an eruption.  Those tiny figures on the arch are fleeing.

There are several bronzes in the show, of various familiar characters in the bestiary of Dr. Seuss. Here we see the beloved "Lorax", the subject of a current movie, and part of the resurgence of interest in Geisel's work. Most of the work shown here was art that Geisel did not show publicly, and only to a few friends.

This exhibit adds considerable depth to the public perception of Geisel's work. It should travel down to larger cities, at least in the West Coast of Florida.

Congratulations to Tammy White Galleries and the PHCC Library for an unusual gem of a small show.