Ryan Mitchell is a fit, tall, handsome guy whose day job is fireman/medic, and his avocation concerned photographer in faraway places. He told me when the Haiti earthquake happened, he felt compelled to go and help the injured. His co-workers covered for him, making it possible for him to go. He was part of a team that saw an incredible number of patients during a short span of time in a basic field examination room. His first priority was to be a medic, but he also carried his iPhone and made a series of pictures from his experiences there, thirty-six 4x6 prints of which can be seen at left. His work is highly personal, all about what he encountered and felt in his travels. In the show, all the larger pictures have accompanying parallel textual narratives about what the photographer was feeling around the time of the picture. His travels have taken him to Argentina, Ethiopia, Haiti and India.

In many of these images, one sees people in relation to their environment. On the left, in "Descending Kasaya", we see a very geometric composition in a long shot of monks in India on their way to hear His Holiness The Dalai Lama speak.

There are also plenty of environmental portraits, like this one of a man named Hanicha, who had just shown the photographer and his companions the new toilet he had fashioned for his guests out of hospitality. Ryan tells the viewer that Hanicha belongs to the lowest caste in his native Ethiopia, but has done well working cattle hides. Ryan adds that he tested the facilities and found them "very nice".


While the great majority of these pictures are SOOC (straight out of camera) or minimally post-processed, others are not. At first, they seem as if made by a different photographer. "Tabo Monk" is one of these. Heavily post-processed, with contrast, saturation, etc. It is very different from the SOOC ones. Ryan tells me that when it helps to convey what he felt, that he will tweak . This is one of the better compositions in the show. Note the tension created by the way the hedge on the right intersects the monk's red robe as it turns to the viewers' left. The Monk almost appears to float. This monastery is in India.

The show was curated by Velva Lee Heraty, and both she and Ryan are affiliated through Local Shops 1, for whom Velva is the Arts Ambassador.[Link].
Another tweaked image is "Resting, the Foothills". In the background, on the right, is the famous Argentinian mountain Fitz Roy. Ryan informs us that the horse on the right was the one he rode, and that it lugged him and his equipment well. 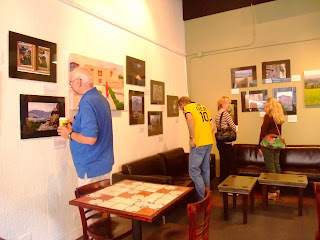 There were a lot of of images on the walls of the cafe. Over thirty larger ones, and around 70 4x6's. I also thought several of the pictures would have benefited from more attention to the light. Food from Ethiopia was served, bringing an expanded sensibility and aura of authenticity to the exhibit. Overall, it was a good exhibit, and I expect to see more of Ryan's travels in the future.
Congratulations to Ryan Mitchell, Velva Lee Heraty and Kahwa for a memorable show and a good evening.