Rosey Williams, the fashionable Rose of of Ramblin' Rose Upcycle, whose store has been featured here [Link], has come up with the First Saturday Indie Market on the 600 block. This was its second time, and considering there was zero media interaction (I found out about it courtesy of Matt Deterior) and no mail blasts, there was a good crowd and some of our best  artists exhibiting.

This large 6' tall painting of a wolf by Sean Williams of Collective, graced the East end of the 600 block, signaling First Saturday Art Walk goers that they were entering an arts space.


On the left is Aureilius Artist, whose graphic work has been reviewed here before. He was live painting and showing his work at the show.  On the right is a painting by Derek Donnelly note the figure painting in a phone scan code. The artist as an integral part of social media.

Derek's opened his new gallery, which will be reviewed here soon. He carries his own and some of the best work from emerging artists in the area, people like Jennipher Chandley and Reid Jenkins. On the right, Derek is shown making a T-shirt. 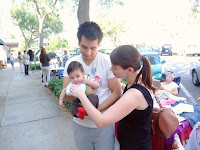 I had the pleasure of running into artists and friends Moi & Melissa Loera, and their new bambino at the show. 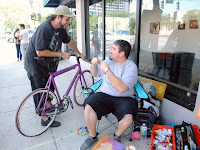 On the right are artists Sebastian Coolidge and Scott Hillis pictured discussing the fine points of baroque aesthetics. Scott, who has been reviewed here, was live painting one of his buffaloes. Sebastian was riding his killer purple fixie.

Reid Jenkins was also live painting next to Scott, both just outside Derek's Gallery. Reid did a lion, a repeating theme, among many, in his current work.
Here's a glimpse of Reid's sketch, showing the drawing for this painting. 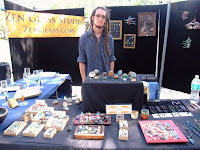 The Zen Glass tent/stand. Their tenth anniversary party was featured here a few days ago. 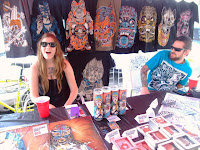 Pale Horse was in the show, here we see Chris Parks and his assistant, both of whom have been reviewed here before, selling t-shirts and affordable giclee prints of his work.


Matt Deterior and his energized, tribal work, here pictured in painted spray cans. Matt has begun painting his Subaru, and here is a picture of him laying on the hood. 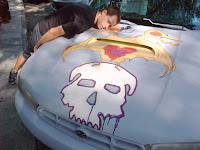 Calan Ree pictured with her work, which has been reviewed here several times before. Here is one of her latest, a horned, guardian figure atop a box, keeper of secrets.

Frank Strunk III with some of his latest work. Note the stiletto steel shoes which are outstanding. 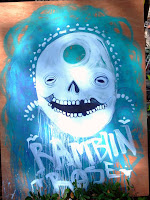 Seen by Ramblin' Rose Upcycle , a piece that was pictured here when it was being live-painted only a few feet from where it was being shown, a hungry Tibetan ghost (?) by artist/musican/friend Alex. 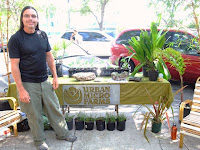 Urban Micro Farms had a stand showing & selling beautiful, well-thought out small garden spaces, a perfect compliment to the art there [Link]. 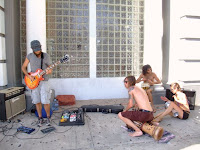 And, of course, there was music. This group filled the air with sweet vibes.

This First Saturday thing is a wonderful concept off to a great start. I spoke with Rosey and there's a lot more to come, changes that will make this an excellent destination/arts event in the area. Congratulations to the artists, viewers, and to Rosey for creating a vibrant new event with great potential.