"Never mind the time theorists, the cesium devices that measure the life and death of the smallest silvery trillionth of a second.... We were the only crucial clocks, our minds and bodies, way stations for the distribution of time."

The finalists were shown and the winners revealed at the Florida Museum of Phtographic Arts' new space(s) in the cube at the intersection of W. Kennedy and Ashley. More on that later.

Johnathan P. Drago's portrait of his surprised-looking, bespectacled grandfather ended up on the CL cover. It was titled: "Don't count the years, make the years count". His was not the only interpretation of 'time' in the form of an aged person.

The Reader's Choice Award went to Maida Millan's evocative and conceptual "Atrapada" (Translation: "Trapped"). A view along a seawall in St. Augustine as dark skies and an ominous storm roll in. On the left is Maida Millan posing with her work.

The judges awarded John Mazzello's "Flamingo" the Grand Prize and $1,000 check. It is a nostalgic image of a vintage trailer, old lawn chair, rusty cooler, and girl looking in the window. It's a fiction, and was created at a car show. A romantic vision of the past.

Julie Busch Branaman's "Time Passes" took 2nd prize. It's an image of an elderly woman sitting on a bed, a walker in the foreground, wood-paneled wall behind her, complete with three cheesy paintings, two of fall, one in winter, all with a home in the frame. The woman's head is in her hands in a gesture of despair. Time, regret and mortality.

Third place went to "Time Traveler", by Joseph Priser. In this image, a figure is pictured at the end of a dark tunnel, at the threshold where it crosses into light. In-between time.


The finalists chosen seemed strong on craft, and a little on the conservative side.


Congratulations to all the photographers who submitted works to the CL contest, to the finalists, judges, CL and FMoPA.

It was my first visit to the FMoPA since its move. They basically have two galleries on two separate floors. What a difference between the old and new spaces! In the Cube, the front desk/gift shop area are in the open, the feel is that of an expansive, cavernous and transparent space in the huge atrium. 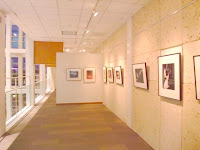 The galleries run along the wall parallel to Ashley, and those have a more confined, intimate space for experiencing the art.

FMoPA are premiering their new space with an Andy Warhol show. There are many of the famous silkscreen prints in this show. On the left we see a photo of two prints, one of Mao Zedong on the left, and John Wayne on the right. The characteristic, carefully controlled balance between the flesh-and-blood fragility of the individuals and their potent iconic qualities, coupled with their aspects as cultural consumables, all simultaneously overlaid is brilliant. 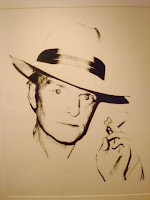 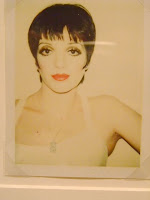 There are prints, large and small, of the many celebrities that Warhol befriended and hung out with. On the left is Truman Capote, on the right, a polaroid of Liza Minelli. 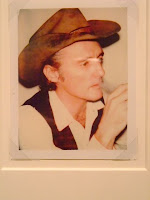 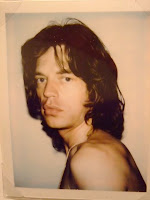 I found the polaroids got the lion's share of my attention. The intimate, small prints, like looking  through a keyhole, their pastel colors, fading, direct, untrammeled by post-processing and one-of-a-kind original nature make them supremely interesting. On the left, Dennis Hopper, a photographer in his own right. On the right, Mick Jagger. There are also multiples, quads that are quite engaging.


At the end of a very long evening, Curator Joanne Milani made time for a very good, informative group tour of the Warhol exhibit.


Congratulations to everyone at the FMoAP on their new space, and on a very good premiere show.