[WARNING: Not Safe For Work. If you are under 18, please skip this review unless your parents read it and agree to let you do the same.]

It's that time: The windows are once again covered at Mindy Solomon gallery. This time with paper, though the door is covered with bubble wrap, nostalgically hailing back to another sex-centered show [Link]. That time the window covers went up after the show was up. This time before. No one under 18 will be admitted to this show without a parent. The exploration of our views on sexuality through the work shown is not so much taboo-busting per se as it is about questioning our comfort zones.


Some of the work in this show is subtle. In another context, its sexual content might remain unnoticed by an inattentive viewer. Leopold L. Foulem's famille verte (porcelain decorated in green) container is an extraordinarily beautiful decorative object. At first, its craft qualities and intricate and attractive complex floral designs overwhelm. Then one notices the two small, almost discrete and elegant figures in a sexual position on the long side. The unexpected tension between form and content in this porcelain is conceptually subversive and plays with the viewers' expectations.


Christina West has several sculptures in the show, all about .7X life size. This one, "After Bernini", is based on Gian Lorenzo Bernini's "The Ecstasy of St. Theresa", the central piece in a sculptural group in the Comaro Chapel of Santa Maria della Vittoria in Rome. The original depicts an ecstatic and sexually charged vision of St. Theresa, involving an angel, which she described thusly:

"I saw in his hand a long spear of gold, and at the iron's point there seemed to be a little fire. He appeared to me to be thrusting it at times into my heart, and to pierce my very entrails; when he drew it out, he seemed to draw them out also, and to leave me all on fire with a great love of God. The pain was so great, that it made me moan; and yet so surpassing was the sweetness of this excessive pain, that I could not wish to be rid of it. The soul is satisfied now with nothing less than God. The pain is not bodily, but spiritual; though the body has its share in it. It is a caressing of love so sweet which now takes place between the soul and God, that I pray God of His goodness to make him experience it who may think that I am lying."

Bernini sculpted St. Theresa covered in the usual saintly garb. Ms. West takes us below the garments and the religious veneer. She reveals her version of the inner view and allows us voyeurs to stare at the writhing figure. In this version, the angel's "long spear", which is an arrow held by an angel/Cupid in Bernini, has become a bright red dildo, and the angel is nowhere to be seen. The sculpture is in white silicone, which has the feel of flesh, and retains the spiritual purity of the experience. The sacred and the profane aspects of sex and viewer/voyeur fuse in this sculpture.


Bart Johnson has several pen-and-inks in this show, about his visits to the demimonde of strip joints. They are like a blend of some of Hieronymous Bosch's paintings [Link] with some of Reginald Marsh's depictions of the lower strata of NYC life [Link]. Here are the messy, organic interface, the tensions, negotiations, identities, commodification and consumption of sex in all their tawdry splendor. In spite of their grotesquerie and satire, there's compassion about the people and situations they inhabit.


The small sculptures of Bonnie Marie Smith are highly individuated figures, with Victorian overtones, rich with the tension between that, sensuousness and sex. Most are missing arms, some arms and legs, perhaps an allusion to the immobilizing trappings of the age.

One of the curatorial highlights of this show is the inclusion and juxtaposition of Scot Sothern, Becky Flanders and Barbara De Genevieve's photography. Sothern photographs prostitutes in hotels that charge by the hour and elsewhere, Becky photographed herself, and De Genevieve, in this particular project, panhandlers in regular hotel rooms in Chicago.

Scot Sothern's working method is immersive. In spite of the obvious differences in gender, economics, and being behind the camera, Sothern feels at one with his subjects and has consorted and drugged with them. In person, as with his photos and writing, Scot is like a character that walked out of a noir novel set in L.A. He is an heir to a tradition of two photographers in his family.This project took over a decade. Most of it working with minimal self-funding and in solitary obscurity. Street-wise as they come, Sothern is also knowledgeable about photography and his place in it. He told me he is influenced by Mortensen. The style is classic documentary, the portraits environmental, with subtle symbology and commonalities with Brassai, Bellocq, and others in the genre. He sounds sad when talking about his subjects and I felt for them as indiviuals, not a generic class. [In the picture above, those highlights are reflections I could not get rid of]. He writes as well as he photographs. Here's a link [Link].


Becky Flanders mentioned that her photographs in the show were based on a myth about a divine character who spoke from her genitals. Ms. Flanders arrived like an asteroid on the local arts scene about two years ago, with self-portraits made while urinating standing up, her genitalia prominently displayed. In this show they are even more so, though  not in a clinical manner, but very specifically and formally posed. This work turns what is commonly referred to as "the privates" public. Barely visible is a marble-like object peeping between the labia in the picture. The effect is that of something staring back, a mirror gaze. Note the lighting, which seems like something out of a strip club.


Barbara De Genevieve has been working with sexual imagery for over a quarter-century. She is an academician, presently the Chair of the Photography Dept. at The School of the Art Institute in Chicago, but has no problem working on both sides of that fence. She said she has made porn since 1994, but qualifies that by adding she is using the word because the work will be called that anyway. The best defense...and De Genevieve is practiced in these arguments. There's a crusading attitude and more than a hint of zealotry about railing against culturally imposed limits, anything that jeopardizes freedom of speech, and a commitment to outing our anxieties. It has cost her an NEA grant, which only strengthened her resolve. It is difficult to pin down her ideas because she is more about expanding the discourse. She speaks with a vivacious, veteran reformer's mantle of authority.

In this show, among other works, she brought four prints from her "Panhandlers" series, in which she met with Chicago black male panhnadlers, offered them $100.00 USD, lunch, dinner, a new change of clothes, a hotel room for the night, and a breakfast the next morning in exchange for photographing them nude (and making a video of the shoot). The result is an interesting set of pictures. De Genevieve trips multiple taboos and themes in this series. Things like exploitation of a minority (blacks) and majority (males), references to the cliche'd female nudes in art, power, class, and more. This is calculated to induce multiple stratified responses in viewers and perhaps an awareness of and exploration of the resulting hierarchy. The men look surprisingly submissive, eager to please, coy, compliant and innocent. Were they flirting? The video shown seems a little surreal. To see more work and videos see here: [Link]. 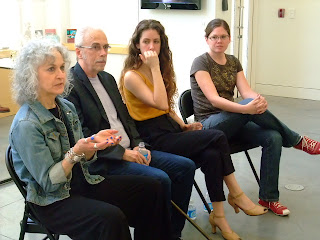 Congratulations to Mindy Solomon and her staff for a beautifully curated, thought-provoking show.