The idea was simple: Each artist was assigned a color. The rest was up to them. Blue Lucy, a Gallery and Design Studio at 653 Central, is owned by Chad Mize and Philip Clark. [Link] They do "Art, Design, and Web".  Opening night was on Sept 24th, with a who's who of the St. Pete scene there, everything from single-speed hipsters to tanned, blinged-out, booth-tanned cougars and everything in between. This is Blue Lucy's first group exhibit, featuring Adam T., Joshua Pearson, John Vitale, Daniel Mrgan, Samuel South, Emily Dwyer, Allan Leper Hampton, Chris Parks, Robert Phelps, Dan Lasata, Roman Black, and Philip Clark.


Daniel Mrgan's "Thomas Stevens Explores the Orange Planet and Makes some Friends", a pen, ink and watercolor on paper. It consists of a figure on a penny farthing bicycle, with his pet on the handlebars, wearing a kind of space suit, gloves, boots and glass-bubble helmet. He has knotty muscles, and horns on his head and nose. The figure is encapsulated and insulated from his environment, which consists of repeating odd, impoverished organic and geological forms. Daniel is one of the stand-out emerging  artists in this area. 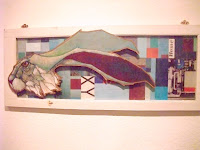 Josh Pearson, the artist who created the "Alphabetto" show currently at Collective (See the review here: [Link]) is shown on the left with his beautifully intense hare. Note how its face is broken up into facets, as is the background, almost like a mosaic.There's an "XY" (male?) below its arching ear, and the word "Home" towards the rear.


On the right is "White", by Emily Dwyer, an Easter Bunny suited doll creature emerging from a blue-ribboned cracked-open egg.  Emily hails from Ringling. This image has that cute & creepy quality that is one of the ambient styles of the day. The colors in this synchronize very well. See more of Emily's work here [Link] and here [Link].

Chris Parks, AKA Pale Horse, brought this giclee print of a CGI of an owl. The symbol of Wisdom is seen here in its full expression, gaze riveted upon the viewer. It may be black, but it's not night, because its pupils are not fully dilated. Note that while its head faces the viewer frontally, its body is twisted to the viewer's left, presenting a guarded, shoulder-forward pose. It is standing on a floating perch, leather-bound with human skulls for caps. A kind of gothic-looking, strong, beautifully crafted image.

Congratulations to all the artists and Chad and Philip on their first (of many, we hope) group shows.