My favorite account of the spiritual ideas of the Floridian mound-builders may not be true. Nor can it be true for the many cultures that came and went during the thousands of years in question. It has to do with a tripartite division of the human soul. They supposedly believed that the soul resided in our shadows, reflections in water, and in the pupils of our eyes. When we die, the parts of the soul residing in the shadows and reflections left the body and entered fish or animals. That in the pupil remained with the body, and it was this part that they prayed to and consulted with in the funerary mounds and funerary bundles in stilt structures built in the middle of man-made ponds. Shadows, reflections and the eye.  Suzanne Williamson's  and John Capouya's current show at the Morean Arts Center (MAC) is titled Shadows and Reflections.

The mounds are difficult subjects for many reasons. Conceptually, they involve a wide span of time, starting about 5,000 years ago. Some were built over long periods of time, some in a period of months. They range from two feet high to around fifty. A variety of peoples inhabited the same areas over time. Some are funerary, housing human remains, from one or two to over 100 individuals. Others were temple mounds, often with structures atop them. Many are trash middens. Shapes vary, including rounded, conical, pyramidal and flat-topped. Often, they are a part of a complex of other mounds, ponds, causeways linking them, etc., although time, weather, massive looting (going on to this day), the fact that the materials turned out to be good for building roads and overgrowth decimated many and have made those that remain often extremely hard to discern. The mounds can be very difficult subjects for a photographer. Many can be formally underwhelming. In the picture above left, "Anderson/Narvaez Mound", the mound is literally depicted in a quasi-documentary style, subframed by trees and other plants. The juxtaposition of nature reclaiming the space with relatively ephemeral life forms, with the longer-lived, but weathered mound, the tones in a relational rather than hierarchical arrangement, make this visually oscillate between our efforts to see "mound" and the other formal elements. This one reminds me a little of the strategies of certain Lee Friedlander landscapes.

There are a few known extensive engineering projects. At the entrance to Charlotte Harbor there is a man-made island, built by the Calusa at a vital strategic point. They built a large canal to run through the island, enabling them to row into safety, and for trading to occur adjacent to markets. Another site has central mounds, surrounded by six concentric man made ridges apparently used for massive trading, where canoes were routed to specific markets, and the central governmental unit probably collected taxes and kept an eye on things. There is only one other earthwork like it in the US, in Louisiana. Trade was extensive in our area, with artifacts found from Mexico to further North than the great mound builders of Cahokia, in Illinois. On the edge of Lake Okeechobee, which used to flood over its banks for half the year, there's another Venice-like structure discovered in 2002. A complex of domiciliary mounds that are linked by causeways. Not big enough for an entire village, but maybe for its elites. Everything there is over nine feet high.

Most mounds are on the Eastern Seaboard and the Midwest, but they can be found as far away as Arizona. At one time there were over twenty mounds in the Tampa Bay area, but now only a third remain.

All landscape photographs go beyond scenic depiction, with secondary aspects that belie the visuals. The mounds and shelters are heavily encoded with religious, historical, cultural, political and other narratives. Each of these is invested in a series of complex discourses, many of the being relational to each other. It is alluded to in the artist's statement -- and in Capouya's text.

"Along the Calusa Heritage Trail, Pineland, Lee County, FL. 2011"  is a glowing, backlit, mysterious landscape. It's not a mound per se, but what the photographer encountered on a trail leading to or from a site, I imagine.
Note the careful layering of picture elements, like the palmetto fronds limned by the light, superimposed over the dark tree trunk near the middle, and that second large tree along the left edge of the frame, apparently reeling from that great blast of light.

Things that would make most photographers cringe, like vignetting, veiled flare astigmatism and comatic streaking are put to use here by a photographer who is intimately familiar with her gear. The result is a romantic and mystical image with the feel of a great secret or revelation lying just beyond our understanding.

Suzanne Williamson's interest in these earthworks began before her and John Capouya's move to Florida. She had already photographically explored the Cahokia complex, which is the biggest known. See National Geographic's gallery here [Link], and a series on rock shelters. It was  a natural progression from those projects into the Floridian mounds. What we see in this show is a subset of a much larger project called Sacred Lands [Link].

For the pictures in this show, she used medium-format film toy cameras, like the famous Dianas [Link] which went out of production and were resurrected by Lomo [Link] and a variety of vintage folding cameras [Link]. Egalitarian tools for a complex project. Black and white was chosen because, as the artist remarked on her website, it is more ambiguous in time. 
Williamson casts herself on her website as a latter-day expeditionary photographer/artist, an analog of the photographers that were involved in the surveys of the American West. She dodges the trap of exoticism primarily by transcending the literality of her subjects, sometimes going into what Walker Evans called "the documentary style", but more with her titles than anything else. A lot of these images look like expressive landscape art. If it wasn't for the titles, we might not know that some are about the mounds. Williamson plays within this conceptual space.

The signature looks of these cameras combined with the photographer's openly romantic, incisive, passionate vision, formal concerns, and obvious background in art places the focus on her spiritual, highly personal, mysterious experience reaching across cultures and time.  The sensuousness of the forms of the earth, trees etc. runs from the surreal to the hyperreal. 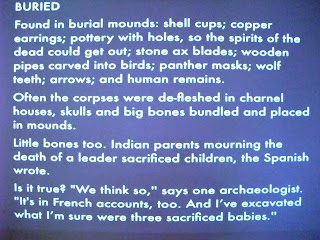 John Capouya's words about his own experiences with the mounds were projected onto the walls. Poetic, grounded, at times journalistic, they bring the viewer the illusion of being there, the conversations, sensory experiences and strangeness of confronting a complex and culturally and politically loaded subject. It provides a contextual and complementary literary narrative to Williamson's visual one.


One of the things that made this a standout show was the installation of large translucent prints that take up the majority of one of the galleries, shown at left. They hung like curtains from the ceiling. One could see through them to other images. Layers of images, with viewers sandwiched in between, just like the alternating layers of materials used to build the mounds. Effectively, it came across as a metaphor that like the mounds, our culture and selves will become layers below the bulges in the sand, below water and the trees that will grow where we live today. Standing between the sheets of imagery and words projected onto the walls, between shadows and reflections, it is a comforting, peaceful thought. 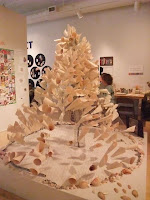 The MAC has an interactive area where viewers can build their own mound.

Congratulations to the Suzanne Williamson, John Capouya and the Morean Arts Center for a memorable show.

The Morean Arts Center is at 719 Central Avenue. This show will run through November 27th.

P.S. There are three mound sites fairly close to the Morean Arts Center. I suggest you go to at least one of these sites.

The Bayshore Home Midden. Drive to SW corner of Tyrone Blvd and Park Street between that and Central Avenue there was a string of mounds where now well-off St, Petersburgians live. The mounds are the reason the houses are elevated.
Posted by Luis at 6:17 PM