The work is varied, though mostly centered around the flesh of solitary females, its pleasures and mortifications, with some notable exceptions. I recognized artists I had previously seen at the Ritz at Square One shows, and also at an ArtOn! event behind the History Museum in St. Pete. This type of imagery is very thin and slippery ice for most artists. It is easy to edge into kitsch.The show I went to see, the last one at Capricorn, was art centered on specific cards in the Tarot deck.


On the left is artist Jason Bridges and his work. It was reviewed here barely two months ago [Link] at another show. His painting, he told me, is influenced by comic books, and has retained some of their graphic style. Jason incorporates pop, mythic and surreal themes into his work, often with a dark, edgy feel.

This hanging figure is one of Samantha Churchill's sensuous wound aluminum wire sculptures.


The Death card is not as final as it sounds: It is also about rebirth & starting over. Here we see a skeletal figure wrapped in a brilliant red garment with smiley faces all over it. In his right hand, a wilting flower, in his left, a very rare Mauser automatic pistol. Death appears to be on the march, and is framed by (Celtic?) concentric circles. 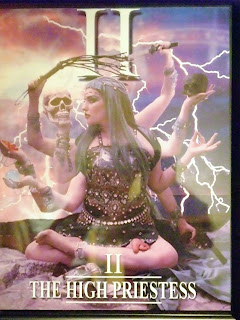 Catrina de Ville's High Priestess card is a digital composite of a Goddess figure with many arms, reminiscent of the Hindu Kali [Link]. She holds a cat o' nine tails, a sword, one adult and one child's skull, makes a mudra, holds a pistol, a jewel (Philsopher's Stone?) and what could be rubies (?). She wears enough arm bling to stock a small boutique. Lightning is striking her, but she is unfazed. She stares point-blank into the adult skull. This is a beautiful, well-designed and executed work.


On the left is another card interpretation by Jason Bridges, "The Hermit". He used the figure of an Easter Island Moa statue for his Hermit. These statues are 15-20 feet high, and were erected by the islanders, who had decimated their home ecologically. Toward the end, they built and erected scores of these heads, hoping the Gods would return. 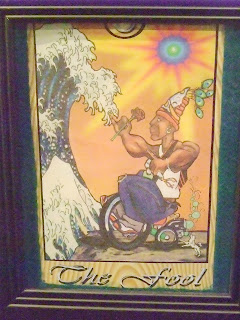 On the right is The Fool on a child's tricycle with a wind-up bubble-blower in back, his faithful dog behind him, a rose in his right hand, and an unidentifiable object in his left, blithely Big Wheeling his way into a Tsunami. It is done in the familiar Hokusai Wave style [Link] . The Fool's headdress looks a little Mayan. Maybe this is an allusion to 2012.

[In the back room, the exhibitionist known as "The Senator", a late 50's distinguished-looking man who can be seen normally at some clubs wearing his lingerie, was Edenically naked. No fig leaf, and perpetually erect, he played the role of bizarre centerpiece and goodwill ambassador.] 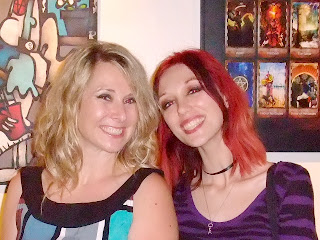 On the left is the charming Daphne Haines who, with her husband Larry, own Capricorn Studios. The woman on the right was introduced to me as The Muse. I should have gotten her card. Daphne took a lot of time during the opening, walking me around, giving a detailed tour of her gallery, for which I am grateful. This is the last show at Capricorn, which is a shame, considering how interesting and energized it and the gallery are. Hopefully we will be seeing Daphne again soon in the Tampa art scene.