The yearly Members' Show at Salt Creek Artworks is up. Curated by Lance Rodgers, it is a sampler of the caliber of the artists who have studios in this St. Petersburg arts haven and great exhibition space. It is also a large space, the largest private artspace in Tampa/St Petersburg. It houses forty artists' studios, the gallery, and a classroom for USF St. Pete. The building, owned by the Price family for almost seven decades, is an integral part of the Bay Area Art Scene.


An intriguing mixed-media abstract by Drouillard in a long format, like a Chinese scroll. It is partitioned vertically by a near-black panel on the viewer's left. Cloudy panels, an "X" form, then an angled, bone-colored section, with faintly parallel cloudy sections, one with what appears to be an eye in it, leading to a sharp, red thin line. on the other side, a gray, encrusted with white barnacle-like bits, tube-like form arises. Twenty-two reasons are enough. Longing comes to mind when viewing this work. 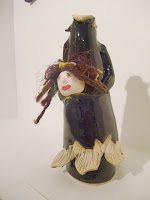 Carolynn Del Monte's "All She Could Do Was Hold Her Head in Her Hands" is a ceramic mixed-media sculpture of a figure about 1.5 ft in height, dressed in a black dress with white fringes, which are bouncy, as if moving, holding her severed head in her arms, which is carried so it can (or can't help but) see, perhaps to guide the figure on its way, as a kind of compass?


Lance Rodgers' "Key of Remembrance" is an oil on canvas painting of a man on a seashore, looking inland while stormy waves crash behind him. He squats on his haunches in a pensive pose, left hand to his mouth. In his right hand he holds a key that has a red ribbon tied to it. There is no visible lock. It lies within the figure. He holds the key.

Lance has been Salt Creek Artworks' Curator for fourteen years. 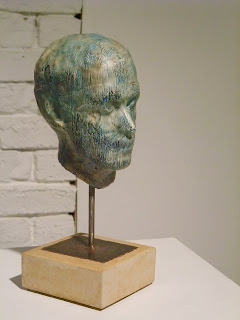 This sculpture by Darren Carter Beistle titled "Erosion Series #1, Head of John", is made of steel, gypsum, oil color, polyurethane and wax. It looks weathered, and is heavily scored over most of its surface area, suggesting the passage of time, rich texture/experience/character.

Frank A. Lewis' "Doorway", an oil on canvas painting, has a very whimsical, playful simplicity to it, faintly like a Matisse paper cut-out image. The sparse color fields are well articulated. Note the upper part of the head is in black, the lower in a pink the door provides access to both.


Michael Conway's "Joy" is a large (about 40x60" or larger) photograph/mixed media work depicting a young woman picking high-hanging fruit from a tree in what could be an orange grove. It has a very nostalgic feel to it, with it being in black-and-white, and the highlights halated. It is striking to see a non-Mexican doing this type of work. From the woman's outfit, she looks like she was picking fruit for fun on a fine day. The title aids and abets that interpretation.


Congratulations to all the exhibiting Members, to Lance Rodgers for the curating, and Salt Creek Artworks for a good show.