Every Day is Halloween @ Kahwa South 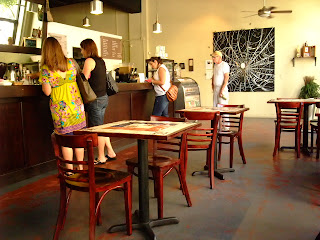 Kahwa has two cafes, North and South. The latter has art shows on a regular basis, and happens to be a place where many Art Taco blogs have been written.

Frank Strunk III works in mixed media some of the time, but his mainstay is metal sculptures. Here he took on the role of curator, bringing in Calan Ree, Coralette Damme, Sarah Thee Campagna, Zen Glass and Demeree for the "Every Day is Halloween" show.

Coralette Damme is a well-known artist in St. Petersburg circles who has worked in several media over time. She's no stranger to the dark side, and imbues it with whimsy, humor and good-natured self-mockery. In "I remember the barn", we see what could pass for a barn board with a field on which 15 spiders seem to be looking for a way out. It evokes childhood and the sometimes creepy things that lie in the foundations of our memories.


"Time Flies" is a mixed media assemblage by Coralette. It depicts a soft-cornered paper rectangle, with a (stamped?) inner rectangle the corners of which have sprigs with leaves about them at the top, a bigger single one at the bottom, and inside, a bell jar like form, with what looks like an all-seeing eye of Ra at the top (like the eye atop the pyramid on the dollar bill). Inside is what looks like a sitting figure with a glazed look. Spiders abound in this thing, around the paper rectangle, and one black one atop the figure. Spiders seem connected with Time here.
[Link]


Frank Strunk III showed this large (4x5-6') fun mixed media piece of a spider web crowded with metal spiders all over it. By the side of the work is a small chart to the effect that one can buy protection from the goblins, etc. for the other days of October by buying a spider, and the degree of protection is matched by the price you pay, an eminently fair and fun $1-$5. It is also the best chance anyone will ever have of acquiring an inexpensive Frank Strunk III sculpture. This was a light-hearted, intensely humane, fun piece that drew lots of attention. [Link]


On the left is an installation by Demeree (no last name), to which I could not find a label/title. It is like a memory box with an adjacent limbless white figure. A jar with a cut-out of a man in it, lies at the top of the box. The three-dimensional figure to the left of the box has what appears to be a disjointed pelvis atop a down-arrow leading to isolated baby legs. Very surreal. In the wooden box is a metal pay-box. 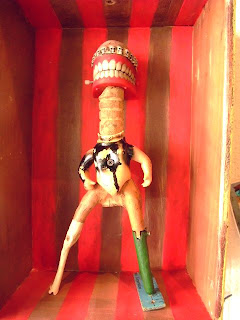 Another work by Demeree, a sculpture with a long neck, big teeth, short arms, no head, a cocky stance, and a peg leg that's painted green, with a piece of a ruler for a foot (get it?). Atop the teeth are what look like the upper half of a denture set with little skulls in it instead of teeth. The whole thing sits in its box, which is striped with red and an earth tone.
[Link] 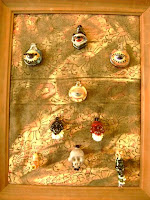 On the right is a mixed media piece by Zen Glass, apparently untitled, with four sleepy evil eyes, two skulls, and two figurines, all made of glass.


Sarah Thee Campagna, no stranger to these pages, works making robots. All kinds of robots, from small to about dinner-plate (in circumference) sized ones, and some are robotic spaceships or flying saucers. Some of them have more than a touch of whimsy, most embody very human themes. I have noticed they are increasing in size, quality, and the style has jumped towards more complexity, a bigger range of themes and sheer elegance as objects.

On the left is one of her latest, the "Spiderborg". In line with the spidery theme of the show, this gorgeous Modernist-looking sculpture looks like a cross between a tribal sacred object and futurist small robot. It's invisible in this picture, but it has a slowly blinking light under the glass cupola. A curiously powerful, self-assured blink. [Link] 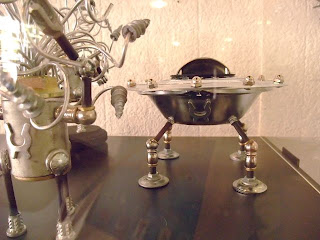 On the right are more of Sarah's creations, these are from the Invasion From Planet Mercury series. One of them is an alien, the one on the left, and a Mercurian Saucer looking solidly planted is on the right. [Link]


Calan Ree could be said to work in the dark/cute/humorous mode, but the work goes well beyond that. Themes of mortality, frailty, courage, individuality and more run through them. Although not present in this show, her dolls elicit empathy from the viewer through common threads running between them. There is an intense, passionate energy running through these works, and a reverence for life and the human soul that has unusual emotional directness.

On the left, are a bottle and plate from Ree's Sgraffito series, a foray into larger ceramics that I see as eminently successful. Her vision carried over undiluted, if not stronger into the new work.
[Link]

When I asked two of these artists if they thought their work was dark, they independently replied in the negative. Every day is Halloween.

See it at Kahwa Cafe South. 204 2nd Ave. South, St Peterburg (great coffee and friendly baristas), runs through the rest of October. Whatever you do,adopt & take at least one spider home, if there's any left!